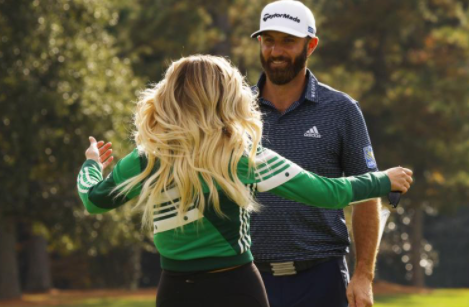 Dustin Johnson has decided to withdraw from this week's AT&T Pebble Beach Pro-Am on the PGA Tour and instead return home to fiancee Paulina Gretzky and his children following victory at the Saudi International on Sunday.

Johnson, who landed a second Saudi International title in three years on the European Tour, had initially planned to head over to Pebble Beach to compete for a third title but his agent David Winkle confirmed to Golfweek that will no longer be the case.

"Following his successful week in Saudi Arabia, Dustin decided it would be best to enjoy a week at home before the Genesis Invitational and the WGC at The Concession," Winkle told Golfweek via a text message.

"Other than being a bit jet lagged, he is feeling good and looking forward to the weeks ahead. While he is disappointed to miss the AT&T Pebble Beach Pro-Am, which is always one of his favourite weeks, he feels his decision is for the best."

Johnson - who has won this tournament twice in 2009 and 2010 on top of recording eight top-10 finishes in 13 appearances - had been installed as short as 7/2 to win this week's event, but now the new tournament favourite is Patrick Cantlay at 7/1.

Incredibly, it means there will be no player in the World's Top 10 competing at Pebble Beach this week, as Cantlay is the next best at 11th in the world.

Johnson's victory at the Saudi International not only marked a third win in his last eight worldwide starts, but also moved him to third behind Tiger Woods and Phil Mickelson on the all-time list of European Tour winners with nine wins.

The World No.1 withdrew in similar fashion from the Mayakoba Golf Classic last year following the exertions of his Masters win in November.

NEXT PAGE: JON RAHM SWITCHES FROM TAYLORMADE TO ODYSSEY PUTTER