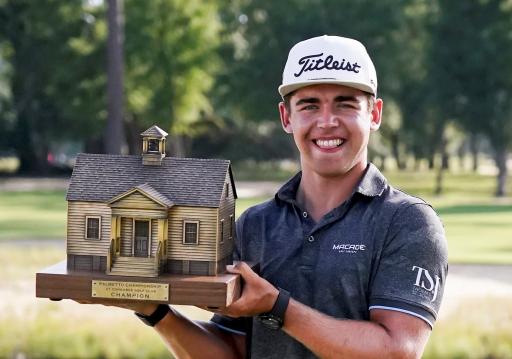 Golf legend Gary Player believes his compatriot Garrick Higgo is "destined for greatness" after watching the 22-year-old clinch his maiden PGA Tour title at the Palmetto Championship in just his second career start on the circuit.

Higgo carded a final-round 68 at Congaree Golf Club to seal a narrow one-shot victory on 11-under par, aided somewhat by long-time leader Chesson Hadley finishing the tournament with three consecutive bogeys to finish in a six-way tie for second.

The fresh-faced South African, who now vaults up to 39th in the world rankings, has now won three of his last five starts around the world following two wins in the space of three weeks on the European Tour in the Canary Islands.

After collecting his biggest pay cheque to date of $1.3 million and lifting the trophy, Higgo then received a phone call from his hero, mentor and nine-time major champion Player, who was understandably full of praise.

WATCH THE VIDEO BELOW (click the right arrow for the video):

"My whole family and I sat here and we had to change our underwear because we were pooping ourselves so much," said Player.

"I don't think I have ever in my lifetime been more excited about anybody winning a golf tournament. I had tears in my eyes because you really deserve it."

Player believes Higgo, at the age of just 22, has already adapted a winning mentality that is going to take him a long way in the game.

"You can have all the coaching and the talent but if you don't believe yourself that you are the best, you can never do it," added Player.

"I think you've got that in your brain now and you are destined for greatness. You've got to keep working hard and set your goals higher all the time."

NEXT PAGE: DUSTIN JOHNSON MOVES UP TO THIRD IN THE PGA TOUR'S ALL-TIME CAREER MONEY LIST