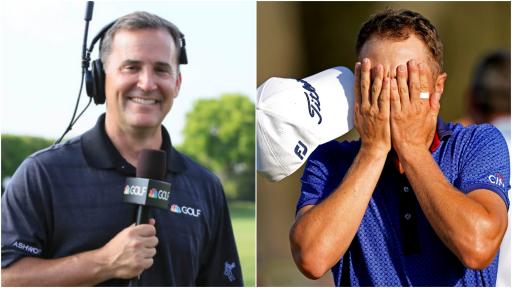 Golf fans have slammed Steve Sands following his interview with Justin Thomas after he claimed The Players Championship on Sunday.

Thomas produced a phenomenal final round, shooting a 4-under par score of 68, to beat England's Lee Westwood by one stroke at TPC Sawgrass.

The Players Championship is the flagship event of the PGA Tour and a tournament that every golfer dreams of winning, with it considered by many as golf's "fifth major".

It was the 14th PGA Tour title of Thomas' impressive career and the first time he has ever won The Players Championship, joining the likes of Tiger Woods, Rory McIlroy, Phil Mickelson and Jack Nicklaus as winners of the prestigous tournament.

It's been a challenging start to 2021 for Thomas, who admitted that his game had "taken a toll" since he made a homophobic slur at the Sentry Tournament of Champions, while he has also had to deal with the passing of his grandad, who played a vital role in shaping Thomas' career.

Shortly after winning the tournament, Golf Channel's Steve Sands interviewed Thomas, but his choice of questions have resulted in him receiving criticism from thousands of golf fans on social media.

Sands decided to focus the early part of his interview on Woods, a close friend of Thomas and although he is recovering from a car crash, golf fans couldn't understand why he needed to be the centre of attention after such an epic win for Thomas.

After discussing his relationship with the 15-time major winner, Sands then brought up Thomas' grandfather, who sadly passed away earlier this year, which immediately caused an emotional reaction from The Players Championship winner.

WATCH SANDS ASK THOMAS ABOUT HIS GRANDFATHER BELOW:

Sands mentioning Thomas' grandfather didn't sit too well with the 27-year-old, with reports suggesting that following the interview, Thomas said to the Golf Channel employee: "You had to do that to me, didn't you?"

Thomas wasn't the only one who was disappointed with Sands for bringing up the passing of Thomas' grandfather, with multiple golf fans flooding the comments of the PGA Tour's Instagram video, while others took to Twitter to shame Sands for his interview.

"A truly unnecessary and quite intrusive question," said one golf fan on Instagram, whose comment received over 1,700 likes.

"Maybe don’t ask a question to purposefully make him cry?" read another.

"Guy just won The Players leave the saddest part of his life out of it."

You can take a look at some of the tweets about Sands below.

Hang your heads in shame if you think that interview was acceptable! Sacking Steve Sands would be a good place to start - but only after he has publically apologised to JT live on air and face to face!

@NBCSports what Steve Sands asked JT about his grandpa at the end of the tournament was uncalled for and should be ashamed of himself. Uncalled for and insensitive.

What an appalling interview with JT and Steve Sands afterwards. Good for JT he walked away. Sands had plenty of time to come up with some good questions, but fell back on the same old "what does Tiger think of it" and he then asked about his Granddad. Shocking stuff

Steve Sands interview was disgusting. I was so happy for Justin Thomas and wanted to hear about his day and happiness. What a jerk #theplayerschampionship

NEXT PAGE: How much every player won at The Players Championship