Jordan Spieth was extremely positive on Sunday, despite missing the chance to win his first title since 2017. 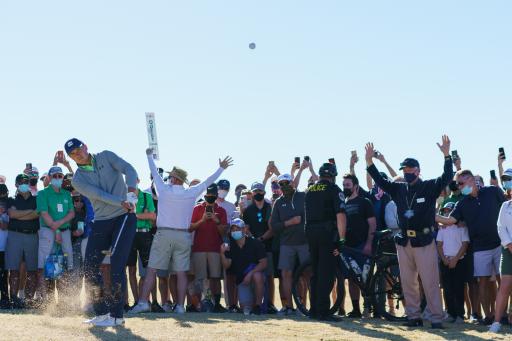 The final round of the Waste Management Phoenix Open on Sunday had every golf fans glued to their TV, in the hopes that Jordan Spieth would convert his overnight shared lead into a victory, his first since 2017, but it just wasn't to be for the three-time major winner.

Spieth couldn't get the job done and shot a 1-over par final roudn to finish in a tie for fourth, whilst fellow American Brooks Koepka made his own comeback and claimed his first win in over a year.

A 10-under par third round from Spieth in Phoenix had everyone excited and the 27-year-old was showing more than glimpses of what made him one of the most talented golfers we had ever seen back in 2013.

Spieth's last win came at the 2017 Open Championship at Royal Birkdale and although Sunday wasn't the fairytale that many were hoping for, Spieth is taking nothing but positives out of his week in Arizona.

"For the rest of the season I think I'm only looking forward," said Spieth after his final round. "I'm only looking at this from a positive angle right now. I really am.

"It's disappointing for myself and Xander, I felt like we had an opportunity to get out and make it a two-man race on the front nine and we brought everybody back in. So that part is really frustrating.

"But I believe in what I'm doing. A result like this just helps confirm what I was already feeling, and that just moves the needle in the right direction.

"I was comfortable in the position I was in, and that's a very new position for me, because it's been a little while. So I like to compare it to how I was in 2014 a number of times in the final group.

"The putts just didn't go in and you've got to relearn what tendencies you have and then just keep on getting there, keep on getting in position. Then they go your way sometimes.

"So that's the goal. I'm really excited about the progress that I've made. It is far from where I want it to be as far as how it feels, but, boy, I was debating not even playing this week after dropping out on Friday afternoon last week.

"I just wanted to potentially go home, and felt like I was really far from where I needed to be and this golf course in general isn't a great golf course for me historically, so I thought I could then go in to Pebble a little fresher. Boy, I'm glad I came!"

Golf fans around the world reacted to Spieth's missed opportunity on Sunday, but many remain hopeful that this is the start of a major turnaround for the former world No.1.

Disappointed he didn’t win it but a great performance by him this week.
Looking forward to watching him this year.
I’m sure he will be up at the top of the leaderboard again #topman https://t.co/YdsFvCb2M8

It was a heartbreaking day as a @JordanSpieth fan but, we know the comeback is on the horizon! Pebble here we come! @attproam #golf

@JordanSpieth Ik today was the super bowl but beforehand it was nice to see you out there competing again at the top of the leaderboards. Tough day but you played some good golf this weekend !

@JordanSpieth Just want to say that you had me riveted and I watched your entire round. I’ve missed you. I know you’re disappointed with the result today but you’re back baby! “A little progress each day adds up to big results.”

Any way you look at the WM...Jordan’s 3rd round was the highlight of the tournament. SPIETH IS ON HIS WAY BACK! Looking forward to this season. Thank you Jordan for the excitement you generated this weekend.

Jordan had a great chance to win even with a C game today. If he makes putts on 7 and 9 then birdies 15 and 17, he wins by 2 and we would be saying he won with a B game on Sunday. He’s back and will win when the putter stays at least warm.

NEXT PAGE: How much Brooks Koepka and the rest won at the Waste Management Phoenix Open