It seems this toddler isn't a big Matt Wallace fan, after she forced the Englishman to step away from his shot at the Zurich Classic. 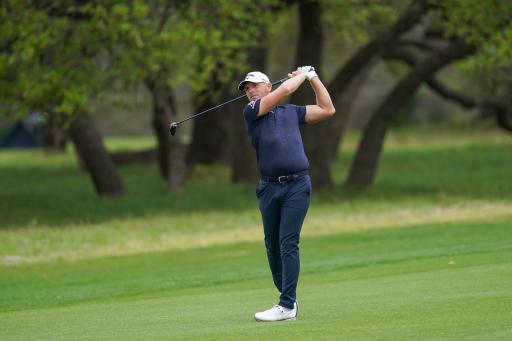 Golf fans have reacted on social media after a video emerged of Matt Wallace stepping away from his ball during the Zurich Classic when a toddler burst into tears during his backswing.

Wallace teamed up alongside Ryder Cup veteran Graeme McDowell for the PGA Tour's team event at TPC Louisina and the pair were involved in one of the best highlights of the tournament during Friday's second round.

Wallace and McDowell were flirting with the cut line, until McDowell made an incredible hole-in-one and his first ace on the PGA Tour, causing Wallace to go absolutely crazy for his partner.

After making it to the weekend, Wallace and McDowell shot a level par final round to finish the tournament 12-under par and in a tie for 23rd place.

During their final round, Wallace was about to attempt a tricky shot with a fairway wood from out of the rough off a downhill lie, when his backswing was interrupted by a crying toddler.

Unlike most amateur golfers, Wallace luckily has the ability to stop mid-swing when something puts him off, something that always impresses me when I watch professional golfers in action.

WATCH THE INCIDENT IN THE CLIP BELOW

The clip caused multiple people to reply in the comments, with European Tour star Eddie Pepperell getting involved, who sarcastically said: "Can't blame her."

"Impressive control to back off right when he was about to transition. I know I speak for many when I say, I would've just let it rip," said one golf fan.

"She probably throws less tantrums though..." said another.

NEXT PAGE: How much Cameron Smith, Marc Leishman and the rest won at the Zurich Classic