Tony Finau and Cameron Champ co-lead with Norwegian pair Viktor Hovland and Kris Ventura on 13-under-par after the Friday foursomes. 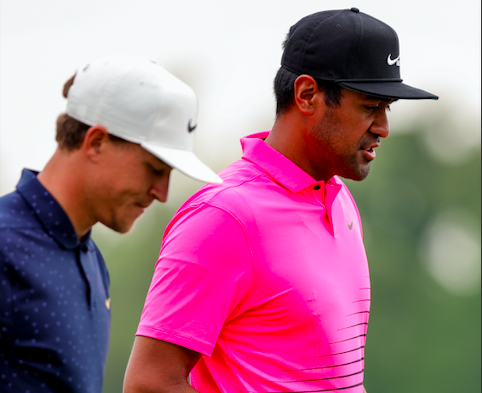 Tony Finau and Cameron Champ share the lead with Viktor Hovland and Kris Ventura at the halfway stage of the Zurich Classic of New Orleans.

Both teams impressed throughout the day at TPC Louisiana with Finau and Champ setting the clubhouse lead on 13-under-par, before Hovland and Ventura birdied their final hole to draw level with the American pair.

Finau and Champ, who have both averaged over 300 yards in driving distance on the PGA Tour this season, made five birdies and one bogey on their way to a 4-under-par 68 to build on their first-round score of 63.

Despite making a double-bogey on the par-4 16th hole, Hovland and Ventura battled back to make five birdies in their last 10 holes to share the lead after day two.

The Norwegian pair shared the lead after the first round with a superb 10-under-par 62 in the fourball better-ball format, which is what the players will be playing in round three.

The European pair of Justin Rose and Henrik Stenson are a formidable team at the Ryder Cup and they took an early clubhouse lead on Friday, after posting a second-round 68 to finish on 11-under-par.

Although the pair made three bogies, they carded an impressive seven birdies to finish on 4-under-par for the day and settle in third place.

Bubba Watson and Scottie Scheffler shot a superb 64 on Thursday and followed this up with a solid second-round score of 69.

Watson and Scheffler teamed up after both players failed at their first attempts to find a partner, but they made six birdies in the foursomes format on Friday to share third place with Rose and Stenson on 11-under-par.

Graeme McDowell grabbed the biggest headline of the day when he made his first-ever hole-in-one on the PGA Tour, on the par-3 17th hole.

McDowell and his partner Matt Wallace rejoiced on the tee box as the Northern Irishman's shot helped the pair score a 2-under-par 70 to finish on eight-under-par in tied ninth place.

WATCH THE VIDEO BELOW AS MCDOWELL MAKES AN ACE

ACE ALERT @Graeme_McDowell cards his first career ace on TOUR to get his team to 7-under. pic.twitter.com/CwQSeOo7lz