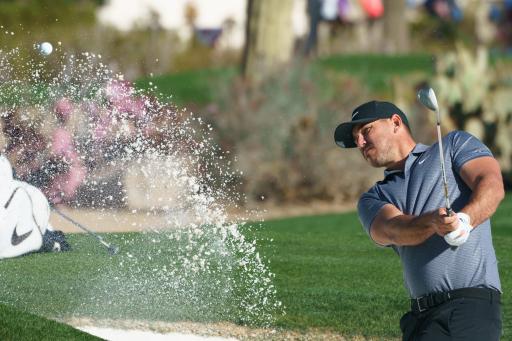 Brooks Koepka shot a 3-under par opening round at the Waste Management Phoenix Open on Thursday and it's safe to say he was in a pretty blunt mood during his post-round interview.

The four-time major champion said last month that he's feeling fully fit and healthy, after a year-long battle with injuries took its toll on his performance.

Having slipped from 1st in the world rankings down to 13th, Koepka has his eyes set on adding to his PGA Tour tally in 2021, whilst he also aims to win a "couple majors".

After shooting a score of 68 to open his account at TPC Scottsdale for the week, Koepka was asked a few questions about his game, but his answers were very short and precise.

What have you done with your putting? Have you changed putters or anything?

What have you been doing differently?

What about the coaching change? Can you talk about that with us a little bit?

Who are you working with now?

And you're feeling healthy?

Koepka's interview was posted on Twitter and golf fans took to the comments section to have their say on the 30-year-old, with Koepka even responding to one golf fan who labelled him "overrated".

Hey Brooks - you got a little something there on your shoulder. I think it's a chip.

Isn’t that great though? No jargon, no bullshit analysis. Just play

He seems to have such a personality on his social media posts with his girl. I don’t get this closed off/obtuse persona that he always puts out there. Obviously, phenomenal talent. Being likeable won’t hurt him.

Third question is awful. Not to defend Brooks, but gotta ask an actual specific question there or else you can expect that kind of response.

These golfers act like golf writers are TMZ trying to catch them in a "gotcha" moment. Why are they so guarded? Its golf. They are one of dozens of marquee players. Brooks isnt Tiger. Its just so frustrating when they act like children.

I absolutely love it. Better than smiles and happy go lucky interviews anyway.