Jordan Spieth moves into contention for his first PGA Tour title since the 2017 Open Championship, and social media is already getting very excited... 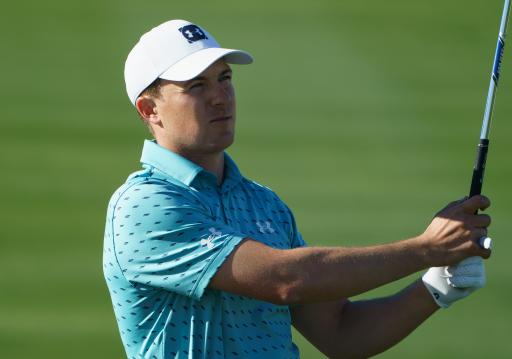 Jordan Spieth carded a second consecutive round of 4-under 67 on day two at the Phoenix Open to move into contention for his first PGA Tour title since he lifted the famous Claret Jug at The Open four years ago - and it's certainly got social media a little bit excited.

The American has endured a wretched run of form in recent years, slumping to a current 92nd in the world, but judging by his first 36 holes at TPC Scottsdale this week, it appears Spieth is very much turning a corner with his game by moving to within three strokes off the pace heading into the weekend.

Social media certainly hopes so anyway, judging by a number of tweets being fired out on Friday evening. Even us here at GolfMagic are failing to contain our excitement:

Jordan Spieth drains a LONG eagle putt to jump to -9 for the tournament and is right in contention pic.twitter.com/vHycX0I1Bv

That a boy Jordan Spieth! I see your 67s. Gonna be around for the weekend. This is fist bump worthy pic.twitter.com/xTuCs9s57l

I'm hardcore rooting for this dude... Love him @JordanSpieth

If I had one sporting wish for 2021 it would categorically be that this is Jordan Spieth on his way back to the top. And it wouldn't even be close. #fingerscrossed

"Things are getting closer and I'm trusting what I'm doing," said Spieth.

"It's definitely a different ball game when you are making some significant changes and moves that I've needed to clean up.

Spieth lies at 8-under par through two rounds, three strokes behind 53-year-old Steve Stricker, who is this year's United States Ryder Cup captain, and Keegan Bradley, another player who has been out form with his last victory dating back to the 2018 BMW Championship.

Scottie Scheffler and Kyoung-Hoon Lee find themselves one stroke behind Stricker and Bradley on 10-under par, with Matthew NeSmith also on that number with still plenty of holes left to play in round two.

Justin Thomas moved up to 7-under par, recovering superbly from a double-bogey six start on the 10th hole which had put him over par for the tournament. However, the American - who was recently dropped by Ralph Lauren for his homophobic slur at the Tournament of Champions earlier this season - recovered superbly from there by rolling in nine birdies to the house.

Jon Rahm failed to get going on day two and has it all to do on the weekend at 5-under par, with defending champion Webb Simpson a further stroke back on 4-under par despite carding an impressive 65.

A number of big names are currently out on the course looking to make inroads into the lead, none more so than Xander Schauffele, Brooks Koepka and pre-tournament favourite Rory McIlroy.