McIlroy came back from 3-over par to shoot 1-under par, whilst Xander Schauffele starts strong at the Waste Management Phoenix Open. 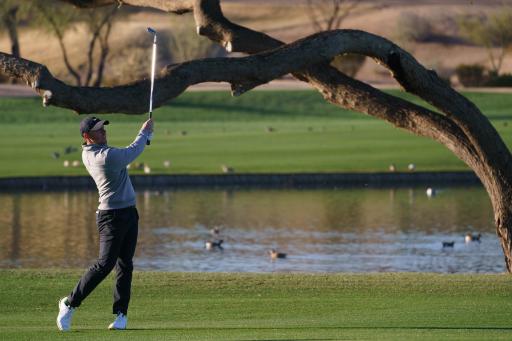 Rory McIlroy turned his opening round at TPC Scottsdale around on Thursday, after he recovered from being 3-over par, to shoot a 1-under par round of 70 at the Waste Management Phoenix Open.

The Northern Irishman started his round on the back nine and got off to a challenging start with a double-bogey at the 10th, followed by another bogey at the par-4 11th to find himself 3-over par through his first two holes.

It looked as though McIlroy's tournament was under threat, but he bouncd back with two birdies at the 13th and 15th - both par 5's - before he chipped in for another after missing the green at the par-3 16th.

WATCH MCILROY'S CHIP IN AT THE ICONIC 16TH HOLE BELOW:

First time playing the 16th. @McIlroyRory finds a way to give 'em a show. #QuickHits pic.twitter.com/zLzYlAsP4P

Two pars followed and McIlroy made the turn level par, before he added another two birdies to the scorecard at the 2nd and 3rd.

A string of pars followed, before a missed fairway at the 8th (his 17th) caused the world No.6 to miss the green from the fairway bunker, leading to his final bogey of the day, with a par at the last sealing a 1-under par round to open his account his Phoenix.

"I feel okay," said McIlroy as he summarised his opening round. "Yeah, it was a good battle back. Being three over through two holes isn't ideal, especially on this golf course where you sort of need to make birdies.

"But I fought back well. Yeah, it was okay. I wish I didn't drop that shot coming in on the eighth hole, but shooting under par after the start wasn't too bad.

"It was obviously cold this morning, so I was really surprised how far my tee shot went on 10 to get into the desert there. It was like a 340 run-out, and I had no idea I could hit 340 in that temperature.

"And then from there, I didn't really have shot, hit it into the front bunker and then I just made a mess of it from there. I thinned the bunker shot into the next bunker and didn't get that one up-and-down. And then on the next hit it behind a couple of trees and had to chip out and hit a really good wedge shot in and just missed the putt.

"It wasn't the ideal start, but I knew on the back nine at least I had some par-fives coming up and a few good chances, and thankfully I was able to take advantage of some of them."

World No.4 Xander Schauffele got off to a strong start with a 5-under par round of 66 to leave go into the second round in a tie for sixth, just three shots behind the lead.

Team USA Ryder Cup captain showed his potential players how to tame TPC Scottsdale, shooting a 6-under par opening round, with the lead currently at 8-under par, shared by Matthew NeSmith and Mark Hubbard.