Ian Poulter enjoyed a great week at the Charles Schwab Challenge, but he, unfortunately, couldn't get the handshakes right on the 18th green. 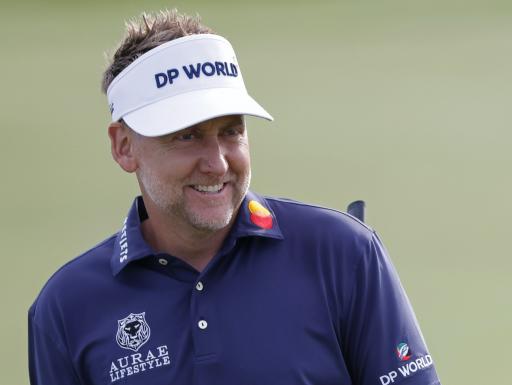 Ian Poulter fired weekend rounds of 64 and 68 to climb the leaderboard at the Charles Schwab Challenge to finish in a tie for third.

The Englishman's top-10 finish at Colonial Country Club was only his second of the season, as he looks to pick up his form with the Ryder Cup approaching in September.

Although Poulter excelled on the fairways and greens with his golf in Texas, he came unstuck when completing the routine handshakes at the end of his third round.

The 45-year-old was in a great mood having just shot 6-under-par, but when he embraced his playing partner Joaquin Niemann he opted for the fist bump, while Niemann went for the regular handshake.

Poulter went for the same tactics with the Chilean's caddie, but he experienced the same problem. The three-time PGA Tour winner completed a trio of handshake mishaps with his own caddie with the same degree of confusion.

I think we can all relate to Poulter's struggles in this department in Fort Worth. With pandemic rules and regulations chopping and changing, there are many people unaware of what type of embraces are allowed.

"Nobody is worse at a high five than an excited golfer," one fan said.

"It hurts my soul to watch them not finish the dap," another fan commented.

"Why must golf be cursed with bad high fives?" one fan commented.

"Tiger and Stevie could have their own YouTube channel dedicated to their high five fails," another fan said.

"You didn’t show the Tiger/Stevie collection of high five abominations!" one fan said.

NEXT PAGE: PHIL MICKELSON RESPONDS AS GOLF FAN GETS PGA CHAMPION TATTOOED ON TO HIS CALF