Tony Finau is one of the most popular players on the PGA Tour and golf fans are hurting after he let another tournament slip through his fingers. 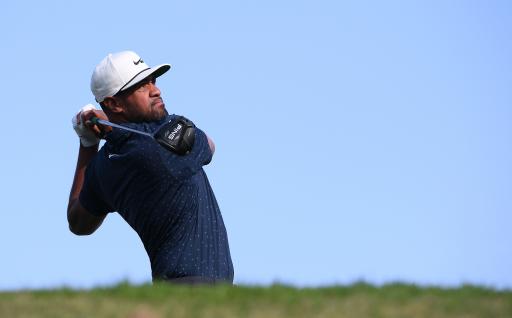 Tony Finau is one of the most adored players on the PGA Tour, by both his fellow playing professionals and golf fans watching at home, but his inability to get the job done on the final day is becoming a painful spectacle.

Although he currently sits 20th in the world rankings and has amassed millions and millions of dollars over the past few years, the fact that Finau only has one PGA Tour victory to his name is criminal.

Since winning the 2016 Puerto Rico Open, Finau has posted 35 top 10 finishes without a victory, more than twice the number of Tommy Fleetwood, who is second in that statistic.

At The American Express last week, Finau went into the final round with a share of the 54-hole lead and got off to a quick start with a few birdies to take the lead by two.

After 10 holes, Finau shared the lead alongside Si Woo Kim, Patrick Cantlay and Cameron Davis, but a costly error at the 11th hole left Finau with his work cut out once again.

The 600-yard par-5 hole was an absolute birdie fest throughout the tournament and when Finau bombed his drive down the middle it looked like he'd add another to his scorecard.

Attempting a low draw up to the hole, Finau ended up over-turning the ball until it bounced its way down into the water, before he missed a three-footer to save his par.

“That was a tough pill to swallow at the time because I just never thought I was going to walk away with 6 there,” said Finau.“But as I know in this game, golf goes on, life goes on. After that hole, I got to keep playing and keep pushing, keep trying to make birdies coming in.”

Finau has now held a 54-hole lead on four occasions without converting it into a victory and for Finau fans around the world, it's becoming increasingly agonising to watch.

Remember when the Tiger Woods PGA Tour games had Sunday Tiger and his stats were all maxed out? Take the complete opposite of that and you get Sunday Tony Finau

When I bet on Tony Finau to win every week pic.twitter.com/HO9rXwqmyn

Today was the day for Tony Finau and once again he couldn't close. He makes Rickie Fowler look like an overachiever.

Mahommes wins, Brady wins, and Tony Finau didn’t close. They are who we thought they were

It's a little crazy how different Finau's career would be talked about if he was just an average finisher, not even a great one.

will Tony Finau ever win again???

NEXT PAGE: How Much They All Won At The American Express On The PGA Tour