Tyrrell Hatton was enjoying some downtime on the driving range when he decided to take a step back and hit a drive Happy Gilmore-style. 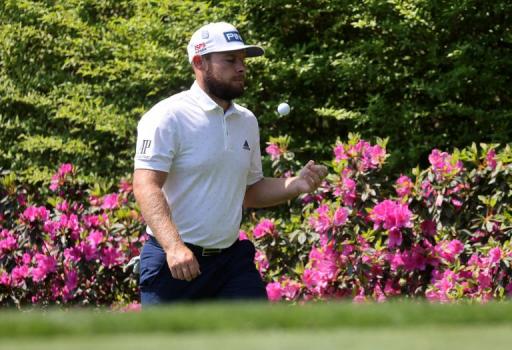 Although Tyrrell Hatton is known for his firey behaviour on the golf course and venting his frustration, he is also known for sharing a joke with his fans.

While on the driving range, Hatton thought he would try to hit a drive that was made famous in the cult golf film Happy Gilmore, where Happy would run up to his ball and send it flying miles into the distance off the tee.

Hatton even dressed up for the occasion with a pink bucket hat and long socks on, but his unusual dress didn't stop him from performing the shot to perfection.

"May we talk about the perfectly matching socks??" one fan said.

"What size waist are those socks Tyrrell?" one fan commented.

"Hatton is a legend fact!!" another fan commented.

"Looks like he has found his happy place," another fan said.

"This is our new look for the next event," one fan said.

The Englishman has had a good season on the PGA Tour in 2021, finishing in the top 10 on three occasions which includes a tied third finish at the CJ Cup in October.

Hatton is now at number nine in the world rankings, which is a testament to the vast improvement in his game. He picked up arguably his most impressive victory at the Arnold Palmer Invitational in 2020.

The 29-year-old has also excelled on the European Tour in recent times, he has six wins in total including a victory at the BMW PGA Championship in October.