Justin Warren misses one of the shortest putts you will ever see, and it costs him big time... 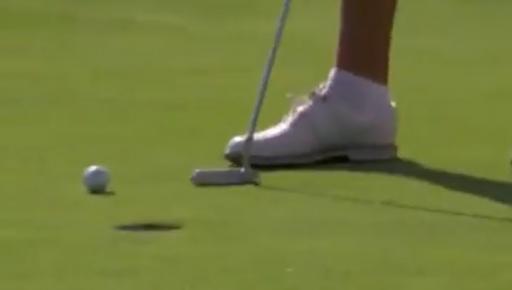 Golfer Justin Warren not only missed one of the shortest putts you will ever seen on the circuit this season, but also missed out on his first-ever PGA Tour start as a result.

Warren found himself in a playoff for the fourth and final spot in this week's Barracuda Championship that is playing alongside the WGC-FedEx St Jude Invitational.

Sadly for the 24-year-old, his lack of judgement on a tiny one-foot putt, which would surely have been conceded in matchplay, crushed his childhood dream of competing in a regular PGA Tour event.

WATCH THE MISSED PUTT BELOW

24-year-old Justin Warren misses a short putt in a sudden-death playoff at the @CudaChamp Monday Qualifier.

The chase for his first PGA TOUR start continues. pic.twitter.com/qJ89zr9CAH

"As brutal as it was to finish the way it did, it’s golf," Warren told PGATour.com.

"It sucks, and it makes me want to punch a wall, but that doesn’t help anyone. I just have to recognize that I made an error that cost me dearly, and it’s a tough one to swallow, but I just have to keep on keeping on."

Rory McIlroy was asked what he made of the miss, to which he replied: "Don't miss one-footers, I guess, is a piece of advice. I guess that's a little bit tough love."

"What a harsh lesson to learn. I pray Justin becomes a wiser pro because of that," wrote PGA Tour winner Michael Thompson.

"There’s a reason we PGA Tour pros take so much time over tap ins. It’s so easy to make a mistake #everyshotcounts."

Here's how a number of golf fans reacted to the putt:

"Sorry but I don’t feel bad. That’s why you don’t take it for granted. Arbitrarily placing the ball down from the side. Didn’t even give it a look. Respect the game."

"Disagree. This is a nervous player trying not to overthink an easy putt in a sudden death situation, not someone taking a short one for granted. Many examples of what you are describing, but this ain’t it."

"Likely took it too seriously. Nervous he was going to miss it so rushed it so he wouldn't think about missing it."

"They say don't change your routine for a reason. That is how you putt when youve shot 45 on the front and are bout to shoot 45 again and just want to get off the course and to the bar. He won't get over that."

WATCH: TONY FINAU TAKES DOWN A DRONE FROM THE SKY WITH HIS DIVOT!