Tony Finau TAKES OUT DRONE with his divot during video shoot! 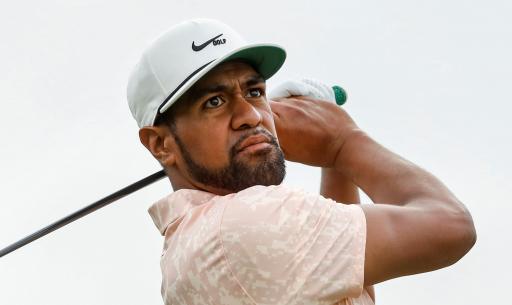 Tony Finau would certainly have had a great chance to win an Olympic gold medal had he competed at the Tokyo Games last week. He might also have a good chance in the Shooting Skeet too judging by the way he took out an innocent drone in the sky during a recent video shoot.

Finau, who posted the hilarious video on his Instagram page, struck a short iron from a tee box and within seconds the drone was sent flying into the turf after being struck by the American's large divot.

Finau initially thought the ball got the drone, but then realised it was the grass.

Here's how golf fans reacted to the video:

"That is some elite divot control."

"This is next level skill."

"Geez, that tee box is hammered."

"Even his pancakes go dead straight."

Finau is still unthinkably going after his second PGA Tour title following his maiden win at the 2016 Puerto Rico Open.

The big-hitting American started the year on fire with three consecutive runner-up spots but he has failed to fire since with a handful of missed cuts.

Finau did finish tied 15th at The Open a couple of weeks ago, which will hopefully give him some much-needed confidence as he heads into this week's WGC-FedEx St Jude Invitational at TPC Southwind.