Xander Schauffele to mark his ball with GOLD MEDAL when he plays Phil Mickelson! 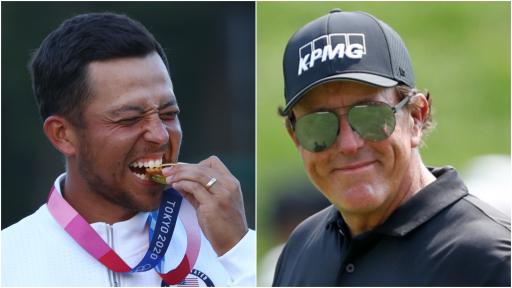 Xander Schauffele may be the new Olympic Golf champion, but Phil Mickelson still wants everyone to know he is the reigning US PGA champion.

Mickelson, who rewrote the record books at the US PGA in May when becoming the oldest major champion in history at the age of 50, said earlier this season that he had found added motivation after being routintely beaten by Schauffele in matches back home in California.

And judging by the six-time major champion's response to Schauffele's celebratory tweet following his one-shot victory at the Men's Olympic Golf Tournament in Tokyo on Sunday, Mickelson would appear to want another crack at the Olympic champ.

Mickelson responded to Schauffele's tweet by saying he can't wait for Schauffele to be marking his golf ball with his gold medal, as that is something he would be doing.

"Can't wait for you to mark your ball with the Gold Medal in one of our matches," tweeted Mickelson.

"I'll totally respect it cuz that's something I would do."

Can’t wait for you to mark your ball with the Gold Medal in one of our matches ! I’ll totally respect it cuz that’s something I would do

"It's on Phil," replied Schauffele. "The shimmer from the gold might blind you when you're trying to make a putt. So be sure to bring your shades."

Mickelson hit back by saying he will bring the same sunglasses he wore en route to winning the US PGA.

"I'll bring the same shades I wore when I won the Wanamaker and I'll bring you a pair too," tweeted Mickelson.

"When the sun reflects off the shiny silver it can be pretty bright too."

WATCH: TONY FINAU TAKES OUT A DRONE FROM THE SKY WITH HIS DIVOT!