Harry Higgs: I know I shouldn't lift up my shirt on national television

Harry Higgs has confirmed he may be fined over his celebration at the WM Phoenix Open and added: "It will never happen again". 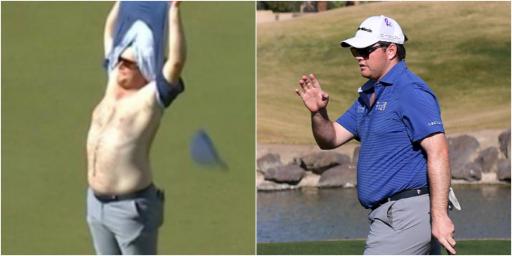 Harry Higgs has admitted he may be fined over his shirtless celebration after draining a par putt on 16 at TPC Scottsdale.

Higgs whipped up a storm with playing partner Joel Dahmen at the WM Phoenix Open. It created a viral moment on the PGA Tour.

Some fans did not like the scenes and felt it was unbecoming of the game of golf. "Silly season", some barked.

Now Higgs, 30, has said he got a phone call from a PGA Tour official informing him they are not exactly thrilled with the pair.

You'd think Phil Mickelson may be in hotter water at present. But still, what Higgs and Dahmen did got tour bosses' attention.

Nelly Korda was a fan of Harry Higgs' celebration

"I may be fined. I've heard whispers of both but nothing official yet," Higgs told the media.

"There was a phone call [from the Tour] and a, 'Hey, you know you're not supposed to do that.'

"I know I'm not supposed to do that.

"I'm 30 years old, I know I'm not supposed to lift my shirt up on national television in front of thousands of fans."

"We may end up having some fun with it.

"If we are fined, and we deserve to be, we would pay our fine but kind of raise money to donate to charity.

"I'm never going to do it ever again. I regretted it almost immediately."

Higgs said he and Dahmen will make a donation to charity. He joked that he would have to find an alternative celebration.

Next page: Hideki Matsuyama lifts up his shirt to Higgs in tribute