Harry Higgs revealed that The Masters champion Hideki Matsuyama lifted up his shirt to him in tribute to his antics at the WM Phoenix Open. 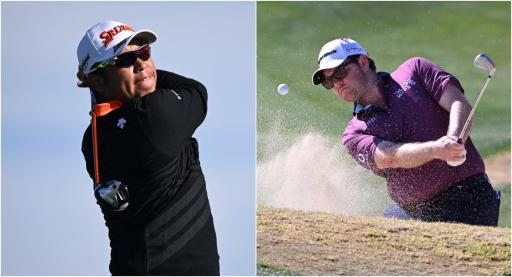 Although Scottie Scheffler won for the first time on the PGA Tour at last week's WM Phoenix Open, one of the real stars of the show was Harry Higgs.

Higgs' shirt-lifting antics on the 16th green at TPC Scottsdale went viral and along with Joel Dahmen, both PGA Tour stars gained an army of new fans.

Higgs, 30, revealed that on the driving range at the Genesis Invitational, Hideki Matsuyama approached him and lifted his shirt to pay tribute to his celebration in Arizona.

Matsuyama is the current Masters champion and so far this season, he was won the ZOZO Championship and the Sony Open.

RELATED: SCOTTIE SCHEFFLER AND TED SCOTT: A PGA TOUR DUO MADE IN HEAVEN?

Funny exchange just now on the first tee at Riviera…

Harry Higgs: “You know it’s bad when Hideki comes up to you on the range and lifts his shirt.”

He is a cool, calm and focused character. His swing is very structured and drilled and he is a character that you wouldn't associate with shirt-lifting jokes.

But people surprise you and it definitely sounds like Higgs was surprised when the Japanese superstar approached him on the practice ground at Riviera Country Club.

"You know it’s bad when Hideki comes up to you on the range and lifts his shirt," Higgs was overheard saying during a practice round ahead of the Genesis Invitational.

Max Homa was also overheard saying, "Look, nudity is a universal language." He seems to be in good spirits as he aims to defend his title from this event last season.

Higgs has always been a popular figure on the PGA Tour, but could he begin a trend of celebrations? It could be worth keeping an eye on Matsuyama when he is in contention in the coming weeks...

NEXT PAGE: IS THIS THE PERFECT GOLF RAKE? "IT'S ONLY PERFECT IF PLAYERS USE IT"