Nelly Korda stopped on the range to sign an autograph for star-struck Harry Higgs, who sent the crowd wild at TPC Scottsdale last week with his shirtless celebration. 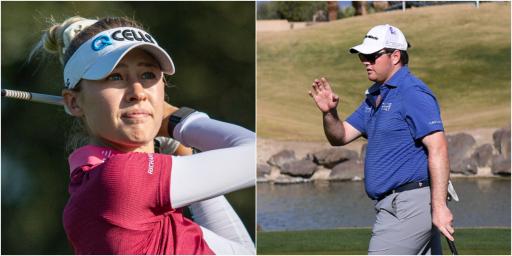 Harry Higgs spent the better part of last weekend not being fazed by whipping off his shirt on 16 at TPC Scottsdale.

Yet it was an encounter with Nelly Korda that made him feel a little bit star-struck, just like when she met Tiger Woods at the PNC.

Higgs and his playing partner Joel Dahmen sent the crowd into a frenzy after they both ripped off their shirts to the boozy PGA Tour crowd.

Ahead of the Genesis Invitational this week, Higgs reportedly said that his celebration was a one-time thing at the WM Phoenix Open.

"It shouldn't have happened in the first place," he told Golf. "But it certainly will never happen again."

His antics appeared to divide the watching golf world. Some barked it was "silly season" while others embraced the pandemonium.

Two players made hole-in-ones. First it was Sam Ryder who sent the crowd ballistic. Then Carlos Ortiz got one of his own.

Ortiz later said he "got nailed pretty hard in the back" with a beer can that was lobbed from the crowd.

.@nellykorda was walking down the range and Harry Higgs stopped his practice session to ask for an autograph.

“I liked your celebration,” Nelly told him pic.twitter.com/DB71h2SCcx

Silly season in Phoenix? Nothing has changed in 25 years

On the range at Riviera, Higgs bumped into world number two Korda. Apparently, she told him she liked his celebration.

Higgs then managed to get an autograph from Olympic gold medalist, major winner and seven time LPGA Tour champion.

Higgs told Golf of her abilities: "She's really good at what she does, and it seems like she does a good job of keeping things simple and believing in herself and her abilities.

"She's obviously had a great last couple years and I'm a big fan. She's the best at what she does and I'd like to be the best at what I do. Never a bad thing to acknowledge someone who's great at what they do."