Sponsor conflict the reason for Jon Rahm no longer being able to wear an Arizona State jersey on the famous par-3 16th at the Phoenix Open. 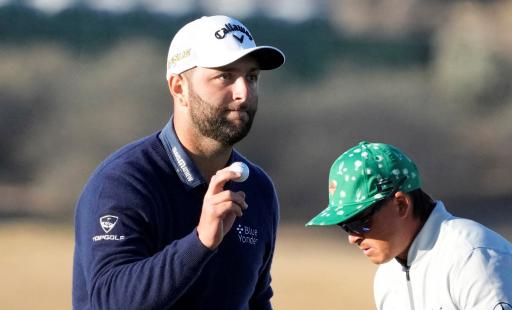 Jon Rahm has revealed the reason for not wearing an Arizona State jersey on the rowdy par-3 16th at TPC Scottsdale during the Phoenix Open this week, and it is all down to his clothing sponsor.

Rahm switched from TaylorMade to Callaway on the PGA Tour last season, a deal that also saw him switch from adidas Golf apparel into TravisMathew as they are acquired by Callaway.

The Spaniard attended Arizona State University on a golf scholarship and he earned a Bacherlor of Arts degree in Communications, and he also resides in Arizona with his wife Kelley Cahill and baby son Kepa.

Rahm has worn the Arizona State jersey every year he has teed up on the par-3 16th hole during the Phoenix Open - something that has become the norm with a number of players to wear a sports jersey while playing the hole aptly known as 'The Coliseum'.

Given Rahm's clothing deal will likely see him represent TravisMathew for many more years to come, the World No.1 has taken the decision to not wear the Arizona State jersey as it does not feature the TravisMathew logo.

"Probably not going to come out in a long time," Rahm told reporters when questoned why he did not choose to wear the jersey on day one at the WM Phoenix Open.

"Not for lack of enthusiasm or willingness, more for sponsor conflict than anything else.

Rahm finds himself at 5-under par for 36 holes, which sees him a long way off the pace set by Sahith Theegala on 12-under par.

NOW WATCH: ZACH JOHNSON ACCIDENTALLY KNOCKS HIS BALL OFF THE TEE YET AGAIN!