Zach Johnson has a mare at the Phoenix Open, just like at The Masters! 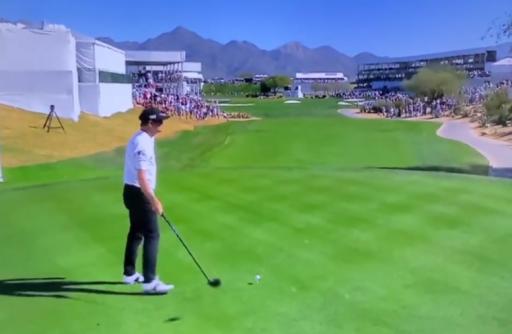 There is a written rule in golf that if you accidentally knock your golf ball off the tee, you get to re-tee your ball. Rule 6.2b (5) is usually only something us amateur hacks ever have to worry about... or if you are two-time major winner Zach Johnson.

For the second time in three years, Johnson accidentally struck his golf ball unintentionally while on the tee.

Johnson stepped into his tee shot at the driveable par-4 17th on day two at the WM Phoenix Open today but was then put off by someone in the crowd so he backed off.

As he was backing off, he waggled his club by the ball and knocked his ball off the tee peg.

HE DID IT AGAIN!! pic.twitter.com/PGwyf4xzbH

Ball Is Not in Play Until Stroke Is Made. Whether the ball is teed or on the ground, when starting a hole or playing again from the teeing area under a Rule:

If you accidentally hit your ball during a practice swing on the putting green, under Rule 13.1d (1) you are able to replace it wihout a penalty, but remember, anywhere else on the course - fairways, bunkers etc - whether you meant to hit your ball or not, it's going to cost you a shot.

LEARN MORE ABOUT THE RULE HERE

NOW WATCH: KID CAUSES MAYHEM AT THE PHOENIX OPEN AS HE DRIVES A GOLF CART INTO A CROWD OF PEOPLE