Sahith Theegala takes full advantage of his sponsor's invite as he races to the front on day two at the WM Phoenix Open. 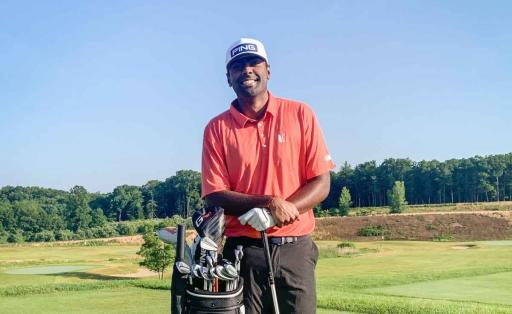 Sahith Theegala has taken full advantage of his sponsor's invite at this week's WM Phoenix Open as the debutant leads a host of star PGA Tour players including Brooks Koepka, Xander Schauffele and Patrick Cantlay after 36 holes at TPC Scottsdale.

Theegala, 24, did not get off to the best start when he returned to finish his first round on Friday as he bogeyed his last two holes at 8 and 9 to fall back to 5-under par.

But after a little break before heading out for his second round, Theegala quickly turned things around as he raced back to the top of the board with a superb round of 7-under 64 to move to 12-under par after 36 holes.

Theegala started his second round with three straight birdies before adding another at the 5th.

He would make his sole bogey of the day at the 8th but then flew home with four birdies on the final six holes to set a target of 12-under par.

Theegala has now made 15 birdies after two rounds, which ties the record for a debutant at TPC Scottsdale.

He is also a bogey-free 9-under par on the back nine this week.

At the age of 24, he becomes the youngest to lead the WM Phoenix Open since Kevin Na in 2005 after two rounds.

RELATED: HERE'S WHY JON RAHM REFUSED TO WEAR AN ARIZONA STATE JERSEY AT THE PHOENIX OPEN THIS WEEK

But if Theegala is to go and land his maiden PGA Tour title on Sunday night he will need to fend off a star-studded group of players that includes four-time major champion and defending Phoenix Open champion Brooks Koepka.

Koepka, who says he feels "embarrassed" at being 20th in the world rankings right now, carded a second consecutive round of 66 to lie just two shots off the pace on 10-under par alongside Olympic Golf champion Xander Schauffele, who went one better with a round of 65.

Schauffele will be looking for some sort of redemption this weekend having thrown this tournament away on the closing holes 12 months ago.

The American's caddie was sent packing from the tournament on Thursday evening after he tested positive for Covid.

It means Schauffele now has to receive daily Covid tests over the weekend and should one of his tests return positive then he will need to withdraw from the tournament - just as Jon Rahm had to do at the Memorial Tournament when he was six shots clear heading into the final round last year.

PGA Tour FedEx Cup champion Patrick Cantlay is also in the mix for the title on 9-under par following a round of 66.

Masters champion Hideki Matsuyama is six shots behind on 6-under par.

Pre-tournament favourites Jon Rahm and Justin Thomas failed to get anything going on day two with rounds of 70 and they both have it all to do over the weekend at seven shots back on 5-under par.

Jordan Spieth could only manage a round of 69 to narrowly make the cut on 3-under par.

WATCH: KID CAUSES COMPLETE MAYHEM AS HE DRIVES A GOLF CART INTO THE CROWD AT PHOENIX OPEN