The Postman is in Las Vegas for the upcoming CJ Cup and judging by his social media is enjoying the Strip. 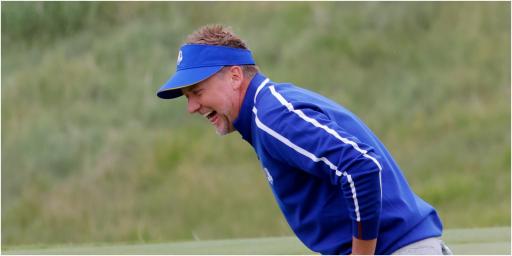 If there's anyone in golf who likes a joke it's Ian Poulter.

The Postman didn't have many reasons to laugh as he played and lost in what is likely his final Ryder Cup appearance last month.

He maintained his personal achievement of being undefeated in the singles though as the United States ran out 19-9 winners.

But Poulter has been quick to forget those demons and has been keeping his social media up to date with humorous content.

He was in Las Vegas where he played in the Shriners Hospitals for Children Open where he missed the cut after shooting rounds of 69 and 74.

He's still in the desert though as the PGA Tour maintains its swing in Las Vegas ahead of the CJ Cup this week.

Poulter posted a picture on his Twitter profile taking aim at his trusted caddie Terry Mundy.

Not at the table @terrymundy…

Here in Las Vegas for the CJ Cup pic.twitter.com/cBzkWfBzFB

It pays homage to the hilarious comedy film The Hangover where a group of pals travel to Las Vegas for a bachelor party.

Suffice to say the group have a bit too much to drink and wake up with no memory of what happened.

Oh, and they find a baby in the closet.

Judging by the rest of Poulter's social media he's in good spirits at the moment.

He was at the heavyweight boxing world championship bout between Tyson Fury and Deontay Wilder.

Fury knocked out Wilder in the 11th round and Poulter posted a video of Fury serenading the crowd with the song: "Walking in Memphis".

The undefeated world champion switched Memphis to Vegas in the song.

ARE YOU ENTERTAINED @Tyson_Fury pic.twitter.com/Vpj7L3UKuL

Poulter also posted a video of him playing in a Pro-Am where he hits a tee shot with American musician Kelley Smith rapping over his swing.

RELATED: TIGER WOODS HAS A TIMEFRAME FOR HIS RETURN

NEXT PAGE: THE COURSES GARETH BALE SHOULD PLAY IF HE ENDS UP AT NEWCASTLE UNITED

PGA tour
Las Vegas
Ian Poulter
the hangover
cj cup
shriners open
Previous
What is the GOLF RULE when you DEFLECT YOUR OWN GOLF SHOT?!
Next
Who is Tiger Woods' girlfriend and are they still TOGETHER after car crash?