Newcastle United are reportedly going all out to sign Gareth Bale in the next transfer window - so let's see where the gold-mad footballer will be able to take his clubs in advance of such a move. 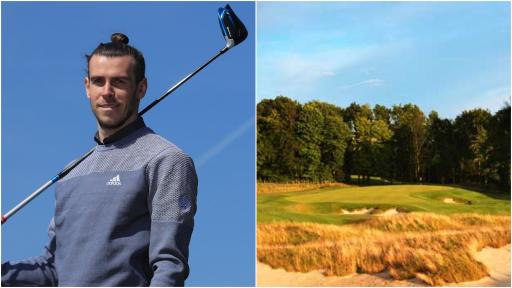 Gareth Bale might be a Real Madrid player as he continues to nurse a hamstring injury on the sidelines right now, but following Newcastle United's sensational Saudi takeover last week, rumours are flying that the Magpies are going to launch a huge bid for the golf-mad winger.

Bale has made it no secret of his passion for golf, regularly posting videos of him teeing it up and being custom fit for new TaylorMade clubs on his Instagram page.

The Welsh football star, who re-joined Spurs on a season-long loan deal last year, reportedly has a 3-handicap.

That makes him the best golfer at Real Madrid, not that it is difficult given keeper Thibaut Courtois is the only other interested player.

Should he end up at Newcastle United next year, he is still likely to be the best player in the Toon.

RELATED: GARETH BALE SAYS HE IS THE BEST GOLFER AT REAL MADRID

Newcastle will be mounting a serious charge in the Premier League over the coming seasons following their £300 million Saudi takeover, making them now the richest club in world football.

So a move to the Magpies could certainly be of interest to the 32-year-old, who has seemingly been out of favour at Real Madrid for a while with the fans.

Then again he did pose with a smile in front of a Wales, Golf, Madrid sign after an international game last year.

There has also been talk that Bale will retire from football soon to solely concentrate on getting even better at golf - but we await to learn of his decision for next season.

Before Bale puts pen to paper on any new deal with a football club though, you can bet he will be checking out the local golf courses to see where he can spend the majority of his time after training and matches.

Should Newcastle be his chosen new club, we have selected five very worthy courses in and around the area that could prove of interest.

RELATED: CHECK OUT THE TAYLORMADE CLUBS IN GARETH BALE'S BAG

BEST GOLF COURSES IN AND AROUND NEWCASTLE

#1 - Close House - hosted the 2020 British Masters presented by Lee Westwood, and players left with rave reviews of the Colt Course so Bale will absolutely love this European Tour setup. It's set in the beautiful and serene Tyne Valley, only seven miles outside the centre of Newcastle and nestled between the banks of the River Tyne. The 250-year-old Close House estate has been lovingly formed into two of the best courses in the country. Situated near the ancient remains of Hadrian’s Wall, the course presents the only Westwood golf courses in the UK.

#2 - Slaley Hall Hotel, Spa & Golf Resort - like Close House, these two courses are of PGA standard and will definitely tick the boxes for golf-mad Bale. While a little further out from St James' Park, about some 40 minutes away, Slaley Hall is very much a golfer’s paradise. Both courses have played host to the European Tour on numerous occasions, with The Hunting Course being a personal favourite of ours here at GolfMagic. This track was designed by former Ryder Cup player Dave Thomas and is much loved for its spectacular tree lined fairways. The Priestman Course is also designed to championship standard and the undulating fairways offer golfers fantastic views over the beautiful Tyne Valley. You've also got the beautiful hotel and spa on hand for Bale to relax in between matches. Looks a no brainer.

#3 - The Northumberland - this one is a real classic, and very possibly the best in the county. It will certainly test all facets of Bale's 3-handicap game though. The course was designed in golf’s Golden Age by Harry Colt and James Braid, and it has regularly hosted national and regional championships, including the Open Regional Qualifier.  It is very challenging but still accessible to a wide range of golfers, and is a pleasure to play, all year round.  Unusually, the course allows you to play over and alongside Newcastle Racecourse.

#4 - Goswick - if Bale fancies mixing his game up on the links, then he is in luck when he heads to Goswick. This one is a little further away from the stadium at around an hour drive up the coast, but it will be more than worth the trip. This course is rated among the top 50 courses in England and is regarded by many course critics as a hidden English gem. This links course is nestled amid windswept dunes along a vast expanse of stunning coastline midway between Edinburgh and Newcastle, just three miles off the A1. Bale will need all the shots here out in the wind, especially punch shots and controlling his distance. He will also need a deft touch with the putter as some of the greens are severely contoured in places. Many of the bunkers are particularly penal so he will need to concentrate in the sand, too.

#5 - Dunstanburgh Castle - another true test of links golf for Bale to master. The course sits in the shadow of the 14th century Dunstanburgh Castle, wrapping around the magnificent Embleton Bay that was recently voted the best stretch of coastline in Britain. It was designed by Open Championship winner and renowned course architect Braid. Benefiting from free draining links land, Dunstanburgh Castle often remains open through periods of inclement weather, when other courses in the region may be forced to close.  And playing onto regular greens in all seasons means the course offers a great golfing experience year round. There is a relaxed atmosphere in the clubhouse here which will no doubt appeal to Bale.

NEXT PAGE: PADRAIG HARRINGTON HITS BACK AT JOURNALIST WHO WROTE ABOUT GOLF BALL ISSUES AT THE RYDER CUP