"For the first couple months, he'd just be sitting at home with his leg up, and it would be throbbing and he'd be in so much pain." 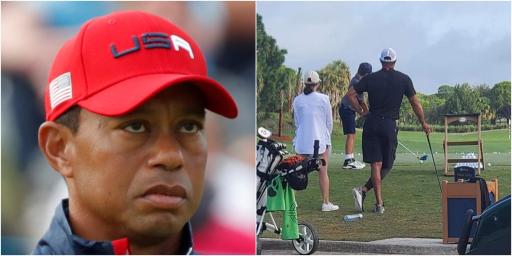 Tiger Woods wasn't even swinging a club but he sent golf fanatics into fever pitch over the weekend.

Instead, the big cat, 45, was leaning on a club in that familiar pose as he watched his son Charlie Woods warm up in a range session ahead of a junior golf tournament in Florida.

Wearing a sleeve on his right leg, Woods was reportedly walking gingerly without the need for crutches for the first time since he overturned his luxury SUV back in February.

Woods was spotted smiling and chatting to Mike Thomas, father and coach to PGA Tour player Justin Thomas and walking around the putting green.

Now we'll have to take this with a pinch of salt but People.com are reporting they have spoken to a "source" close to the Woods camp and they have made a sensational claim.

Whoever this "insider" is, they believe the 15-time major champion firmly has his eyes set on a return to the PGA Tour to compete once again.

"Tiger has made a remarkable recovery in the past few months, but it's even more significant lately," the source reportedly told the publication. "It's like every day he can do more, he can handle more, the pain is less and he's feeling better."

They added: "He says that the pain is very manageable now. For the first couple months, he'd just be sitting at home with his leg up, and it would be throbbing and he'd be in so much pain.

"Now he still has pain, but it's nothing like what he dealt with before. He's feeling strong and healthy and optimistic that he'll be able to return to tour.

"He's got a timeframe in his head, but he's not really putting that out there; he knows when he wants to return, and he's going to make it happen," said the source. "He says even if he's not at 100 per cent, he knows how important it is to get back out there and compete. That's his goal."

The grim details of Woods' smash when he was driving more than twice the speed limit of 45mph were revealed by the doctor who treated him.

Woods suffered "significant orthopedic injuries to his right lower extremity" on the 23 February incident, according to doctor Anish Mahajan.

He had "commuted open fractures" which meant his tibia and fibula bones had broken the skin requiring immediate surgery.

It looks like Woods' physical therapy is progressing nicely now.

Whether or not you believe this "source" is up to you to decide.

NEXT PAGE: TIGER WAS MATCHING DECHAMBEAU'S NUMBERS IN 2004