Jay Monahan to PGA Tour pros: "Anyone on the fence needs to make a decision" 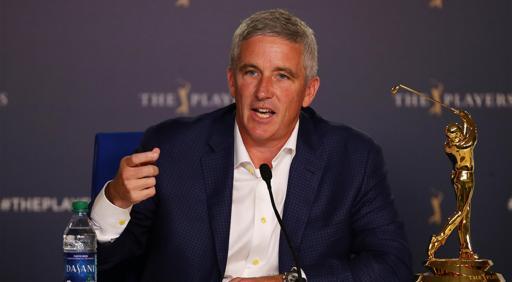 PGA Tour commissioner Jay Monahan has told all PGA Tour players currently on the fence about joining a new Saudi Golf League will need to make a quick decision on their future.

Monahan met with PGA Tour players at a mandatory meeting on Tuesday ahead of this week's Honda Classic at PGA National.

"I told the players we're moving on and anyone on the fence needs to make a decision," Monahan told the Associated Press.

"All this talk about the league and about money has been distracting to our players, our partners and most importantly our fans.

"We’re focused on legacy, not leverage."

One PGA Tour player who attended the meeting revealed exactly what Monahan did when asked what would happen should a player sign up to Greg Norman's new super golf league backed by Saudi billions.

"He pointed to the door, we knew what that meant," said an unnamed PGA Tour pro.

"This is just the beginning..."

What do you make of this?!

It emerged in the media earlier today how Norman had penned an extraordinary letter to Monahan, essentially confirming the former World No.1 was ready to go to war with him and the PGA Tour.

"Commissioner - this is just the beginning. It certainly is not the end," Norman concluded his lengthy letter, which you can read here.

It is understood that any PGA Tour player breaking away to a Saudi Golf League will no longer be allowed to play in PGA Tour events.

There is also a strong probability that anyone leaving the PGA Tour for a new super league will lose their right to ever compete in the Ryder Cup.

Norman accused Monahan and the PGA Tour in his intense letter of "threatening and bullying" players to remain on the circuit instead of giving all players the chance to play golf wherever they want around the world.

According to reports, a memo was sent out to select players and agents earlier this week where Norman made it clear any ban of a player would be "utterly impermissable under competition and other laws."

"Finally," wrote Norman, "you should know that LIV Golf Investments is on the side of the players. None of us should stand for these egregious acts of bullying by the PGA Tour."

NEXT PAGE: PHIL MICKELSON ISSUES APOLOGY TO SAUDIS BUT NOT THE PGA TOUR