Brooks Koepka will be a factor this week after opening up with a 2-under 68 at PGA National. 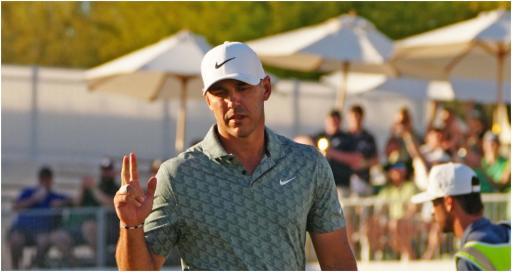 Brooks Koepka made a respectable start amongst the first wave of players at the Honda Classic on the PGA Tour.

At PGA National, famed for its stretch of holes nicknamed The Bear Trap, Koepka carded a solid first round of 2-under 68.

What is The Bear Trap?

That round involved three birdies and one bogey which at the time of writing was inside the top 10 in Florida.

It was Rory Sabbatini who emerged as the player who appeared to come out of the blocks fastest, shooting 5-under.

The American, Kurt Kitayama, also started well and managed to find four birdies in a row as he looked to go low.

Koepka played the back nine first and navigated The Bear Trap at 1-under par, gaining a shot at the 15th.

Elsewhere, the PGA Tour players were this week wearing purple ribbons on their hats in honour of the late Tim Rosaforte.

Rosaforte, nicknamed Rosie, was a trailblazing journalist and left the golf world in mourning in January after dying with Alzheimer's Disease. He was 66.

Sabbatini, too, caught the attention of golf fans with a spectacularly colourful outfit.

Rory Sabbatini moves into the lead at -4. pic.twitter.com/3FpDry9uwb

Players at the Honda Classic are wearing purple ribbon in honor of the late, beloved golf writer Tim Rosaforte. pic.twitter.com/tEPl9IEH1q

Most balls in the water: Ryan Palmer (17)

Most rounds played without a ball in the water: Jim Furyk (18)

The field is noticeably weaker this week. Sungae Im was the betting favourite going in, closely followed by Koepka.

Other strong players in the field include Daniel Berger, Tommy Fleetwood, Shane Lowry and Louis Oosthuizen.

A double bogey at the fourth and another dropped shot at the seventh undid the Chilean's fast start.

Koepka faced the media before the event and claimed he believed the Saudi Golf League will not go away.

He claimed that someone will "sell out", while Rickie Fowler, too, suggested talk of the league would not dissipate.

As Koepka and the field were playing, Greg Norman's email he sent to the PGA Tour's commissioner Jay Monahan was leaked.

In that, he accused Monahan of trying to bluff, intimidate and bully the PGA Tour players who were contemplating joining his start-up.

Norman claimed players were interested in joining his league and still play on the PGA Tour. He vowed this was just the beginning.

"What exactly are you afraid of?" he asked. Read more about that here.