Rory McIlroy apparently shot the easiest 66 at Seminole on a week off before taking aim at other pros with money in their eyes. 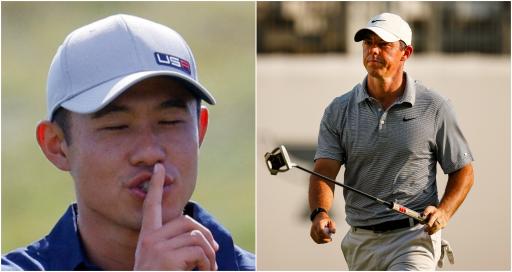 Rory McIlroy admitted he didn't want to kick a man while he was down but that didn't stop him tearing into Phil Mickelson.

If you are just emerging from under a rock and have not taken in any golf news, Lefty is currently in his own personal exile.

That is after his explosive, divise and in his words "reckless comments" in a November phone call to a biographer that were made public.

Mickelson effectively admitted to cosying up to the Saudis because it gave him and other players leverage on the PGA Tour.

One by one, a number of high-profile players came out to pledge their allegiance - or fealty if you are Jon Rahm - to the PGA Tour.

McIlroy described Mickelson as, "naive, selfish, egotistical and ignorant". Then he took a deep breath and added: "It's sad".

Now, it appears the 32-year-old Northern Irishman has taken another subtle dig at Mickelson and other pros guided by the money.

What followed was not pretty. Greg Norman sent a rather interesting email to the PGA Tour commissioner Jay Monahan.

In that email, he accused Monahan of effectively bullying the PGA Tour pros and questioned the legality over threats to ban players.

What are you afraid of, he asked. Meanwhile, McIlroy has taken a back seat. He has said what he said. His tone hasn't changed for years.

"I don't like the where the money is coming from," he previously told the media, referencing the sovereign wealth of Saudi Arabia.

McIlroy is not playing on at the Honda Classic this week. Instead, he played Seminole alongside Sky Sports presenter Nick Dougherty.

Dougherty posted that McIlroy shot the easiest 66 you'll ever see and that he almost pipped him on a drive. Still, it wasn't good enough.

McIlroy and his father Gerry reportedly ended up winning the match against Dougherty and Wayne "Radar" Riley.

McIlroy also decided to twist the knife a little bit further by posting a quotation from the Greek philosopher Epicurus: