Tropical Storm Henri meant that there could be no play at Liberty National on Sunday, pushing the final round of the Northern Trust to Monday. 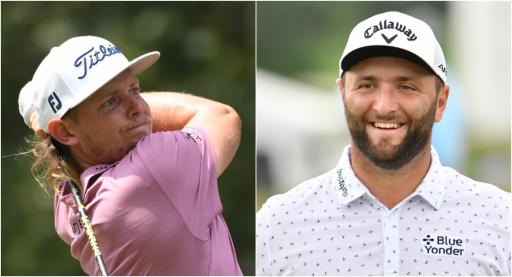 Jon Rahm and Cameron Smith share the lead on 16-under-par heading into the final round at the Northern Trust, after there was no play on Sunday.

On Saturday, the PGA Tour announced that due to the projected path of Tropical Storm Henri, there would be no play at Liberty National on Sunday and the final round would be pushed back to Monday, August 23.

The third round at Liberty National saw some incredible scorecards, none better than Smith who fired a round of 11-under-par and missed the chance of shooting a 59 on the 18th green.

The Australian began the third round on Saturday seven shots behind Rahm but he made a fantastic start with three birdies on his opening three holes.

Smith played the front nine in 6-under-par and he added birdies at the 10th, 13th and 14th holes to go 9-under-par for his round and whispers began to start about a 59.

The World No. 28 needed three birdies in his last three holes and after completing the task on the 16th and 17th, he missed a putt on the final hole for a 59.

Smith settled for an 11-under-par 60, which set the new course record at Liberty National and tied the lead with Rahm, who shot 4-under-par on Saturday to stay in contention.

It could've been so much better for the reigning US Open champion. He played his first nine holes in 4-under-par, but a double-bogey at the 13th hole and a bogey at the 16th hole brought him back to the field.

The pair lead the way by one shot ahead of Erik van Rooyen, who shot a superb score of 62 in the third round to fire himself up the leaderboard and the FedEx Cup rankings.

The American pair of Justin Thomas and Tony Finau are two shots behind the leaders on 14-under-par, after shooting scores of 67 and 68 to remain in touch.