One of the most incredible wayward drives in history on the PGA Tour! 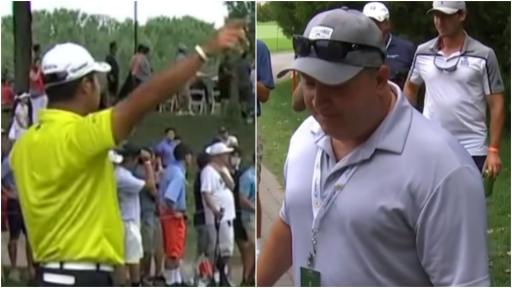 Hideki Matsuyama hit a wayward drive into a golf fan's shirt on day two of the Northern Trust on the PGA Tour.

Matsuyama sent an errant tee shot down the right side of the par-4 10th and the ball bounded off the path and then up into a gentlemen's shirt.

"The ball went between my legs, hit my knee and somehow rolled up into my shirt," said the shocked golf fan.

WATCH THE INCREDIBLE VIDEO BELOW

While there were disappointinly no shouts of 'FORE' from Matsuyama or anyone else on the tee for that matter, the Masters champion did at least signal right with his arm.

Matsuyama, and the rest of the crowd, saw the funny side of the incident as he went to identify his ball and drop his ball without penalty.

He then signed the ball for the gentleman to the delight of everyone watching on.

Matsuyama took his free drop and then hit his second shot from 180 yards into the rough beyond the green. Unfortunately he would not get his ball up and down for a par, but he would get the shot back with a birdie on the 13th.

After a slow start with a bogey at the par-3 2nd, Matsuyama had been on something of a roll on the front nine when rattling home six birdies in the space of seven holes from the 3rd hole, including five in a row to the turn to go out in 31 shots.

Matsuyama had moved to 8-under par for the tournament standing on the final tee but he made a disastrous triple-bogey seven to fall back to 5-under par and seven shots off the pace heading into the weekend.