Jon Rahm: "If this wasn't The Players, we would not have played yesterday"

Jon Rahm is not convinced any action should have taken place at The Players Championship on Saturday. 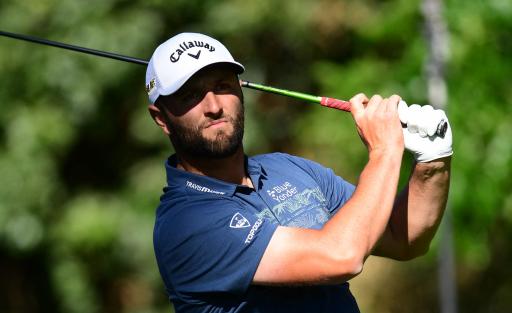 Jon Rahm believes the only reason PGA Tour players were out playing in brutal conditions at TPC Sawgrass on Saturday was because it was The Players Championship, a tournament many would consider the unofficial fifth major of the season.

Rahm, the World No.1, found himself on the fortunate side of the draw as he got the better of the treacherous conditions in Ponte Vedra Beach.

His comments would appear to reflect those of Brandel Chamblee, who felt play should have been stopped on Saturday, especially as a result of the carnage that was seen on the Island Green 17th hole.

The Players Championship has been forced into a fifth and final day on Monday as a result of inclement weather in the area the past few days. It marks the first time the tournament has gone into a Monday finish since Fred Funk won in 2005.

Related: Brandel Chamblee - "They should stop, the 17th is unplayable"

"I was on the good side of the draw, so not as much of a challenge as other people had out there," said Rahm, who finds himself well off the pace heading into the final 18 holes.

"I'm one of those who believes that if this wasn't The Players Championship, we would not have played yesterday. I don't know if they should have.

"Luckily I was on the other side, and today I was able to play a rather mediocre round of golf and post a decent score and I'm still in the hunt for this tournament, so I consider myself lucky."

Rahm was then a little sarcastic as to how long he had waited to hit another golf shot on the weekend.

"Haven't done anything for two years, which is almost odd. I almost feel like a travel day and a little bit more, and like oh, we've got to play now.

"Yesterday I hit one shot and I went home. This is probably the weirdest event we can possibly have."