Jon Rahm makes a quintuple-bogey nine at the par-4 4th, marking the highest score on a single hole of Rahm’s PGA Tour career by two strokes. 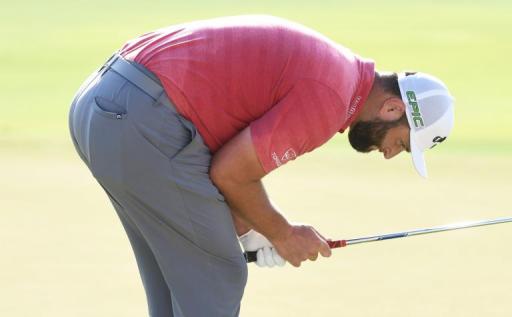 Jon Rahm recorded the highest score on a single hole in his PGA Tour career with a shocking quintuple-bogey nine at the par-4 4th in the final round of The Players Championship.

Rahm, 27, started the final round at 3-under par and six shots off the pace set by Anirban Lahiri.

After a solid start with a birdie at the par-5 2nd to edge a little closer, the World No.1 tumbled out of contention with a bogey at the par-3 3rd (when clattering his ball into a fan).

He then followed that up with his tournament-ending nine at the par-4 4th.

Related: Jon Rahm says he has no interest in seeing any of his stats on the PGA Tour

Rahm drove into the fairway bunker leaving him 111 yards to the pin, but unfortunately he sent his approach shot left into the water.

He then dropped into the right fairway some 90 yards out, but then once again sent his wedge shot into the ripples.

Rahm had another go from the same spot and thankfully found dry land, but he would then take three more jabs from there.

It all went down for a quintuple-bogey nine, the highest one-hole score of Rahm's PGA Tour career by two shots.

To Rahm's credit, he went and birdied the par-4 5th but he handed that back with another bogey at the par-4 6th.

Related: Jon Rahm does not believe play should have continued at The Players on Saturday

Jon Rahm records a quintuple bogey at the par-4 4th.

9 marks the highest score on a single hole of Rahm’s PGA TOUR career by two strokes.

Rahm hit the ball how many times on 4??? pic.twitter.com/xGr8n420IQ

Next Page: Russell Henley makes an incredible albatross at The Players Championship