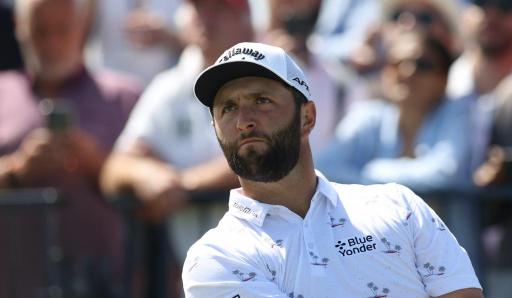 It's a lot of money, even for these top professional golfers who battle it out for eye-watering cash prizes every week.

$15 million will go to the winner of the Tour Championship at East Lake Golf Club this weekend.

Australian golfer and mullet enthusiast Cam Smith was down to earth in his response to the question that is asked every year.

What would you do with the money?

He joked he would probably buy some more fishing gear.

And Rahm, who won his first ever major this season when he claimed the US Open at Torrey Pines, had a sensible answer.

"Save it and invest it responsibly, unlike any other 27-year-old ever said," Rahm, 27, said.

"I said it before, we get this question every time. I’ve been very fortunate that at my young age I make more money than I ever thought I could make.

"I’ve never done this for the money, but obviously, it’s an amazing bonus and even already I can already afford a great life for my family and the future of my family.

"If I haven’t bought anything extravagant yet, like, yeah, we live in a very nice house and we have some nice cars, but nothing out of the very ordinary, I can’t really think of it, nothing that would like surprise anybody or raise any eyebrows, to be honest, nothing that’s that special."

"Be a goldfish."@JonRahmPGA is taking the wise words of @TedLasso to heart. pic.twitter.com/SkG4uFyqZP

Rahm has already won $7 million in earnings this season alone.

He has approximately $35 million in career earnings even if he finishes bottom of the pile this week.

He's not a fan of the staggered format, but Rahm won't grumble too much on a ball strikers golf course.

The Spaniard is only four strokes behind the leader Patrick Cantlay.

If he gets a fast start, he may be too difficult to catch.

Perhaps he may need to think about what he will be investing in?

NEXT PAGE: HOW TO WATCH THE TOUR CHAMPIONSHIP