Jon Rahm's temper was running high at Caves Valley Golf Club on Saturday as he chased down Patrick Cantlay and Bryson DeChambeau. 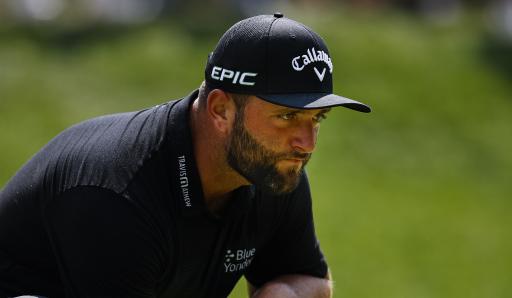 Jon Rahm has been known to have a fiery temper and he demonstrated that once again in the third round of the BMW Championship after he was annoyed with a chip shot he hit at the par-5 16th hole.

Rahm had come up short with his third shot to this 556-yard hole and after he hit his next chip shot to the hole, he was fuming with the result and dropped an F-Bomb.

He used colourful language more than once after hitting the chip as he was extremely frustrated, but fortunately for the World No. 1, he rolled in his putt to save par.

At this stage with just two holes on Saturday remaining, Rahm had fallen five shots behind Patrick Cantlay on 17-under-par, as both Cantlay and his fellow American competitor Bryson DeChambeau both made birdies on the 16th hole.

Rahm running as hot as the mics. pic.twitter.com/j7u9bHcqDQ

The Spaniard seemed to be annoyed that his ball did not roll as near to the hole as he thought it would, and his anger may also have still existed from his third shot, a pitch which had come up short of the green.

Rahm has been in scintillating form on the PGA Tour in recent weeks. He has finished in the top five in three consecutive tournaments, which included his maiden major victory at the US Open.

But that is his sole win of the 2021 season and he will be hoping that he can begin to convert these consistent finishes into more winners' trophies.