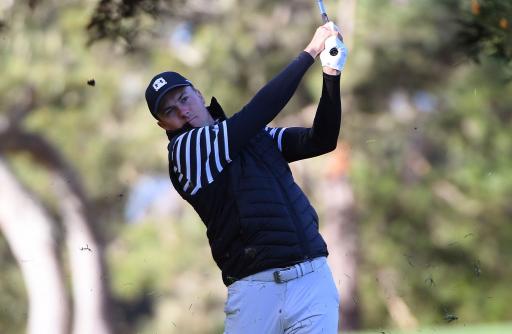 Jordan Spieth continued his impressive resurgence on the PGA Tour as he moved into the 36-hole lead at the AT&T Pebble Beach Pro-Am.

Spieth carded an impressive 5-under 67 at Spyglass Hill on day two to move to 12-under par and one stroke clear of compatriot Daniel Berger, who came home in 31 shots on the opening nine holes for a round of 66 at a windier Pebble Beach.

2 birdies and a fist pump on the opening nine for @JordanSpieth.#QuickHits pic.twitter.com/wUp7iNT9nc

Spieth has not won a tournament on the PGA Tour since lifting the Claret Jug at the 2017 Open at Royal Birkdale.

Sweden's Henrik Norlander moved into solo third on 10-under par after a round of 70 at Spyglass Hill.

Pre-tournament favourite Patrick Cantlay, who opened with a joint course record 10-under 62 at Pebble Beach on Thursday, failed to fire on day two at Spyglass Hill with a disappointing 1-over 73 to fall back to 9-under par for the tournament alongside English duo Tom Lewis and in-form Paul Casey.

Further down the board, Jason Day carded a 69 to move to 6-under par.

Rickie Fowler's miserable run of form continued as he posted a 3-over 75 at Spyglass Hill to miss the cut by several shots.

Phil Mickelson carded a disastrous 80 after sending two shots into the water on the par-5 18th to finish his week on 10-over par.

All players making the halfway cut will now play the final two rounds on the weekend at Pebble Beach.