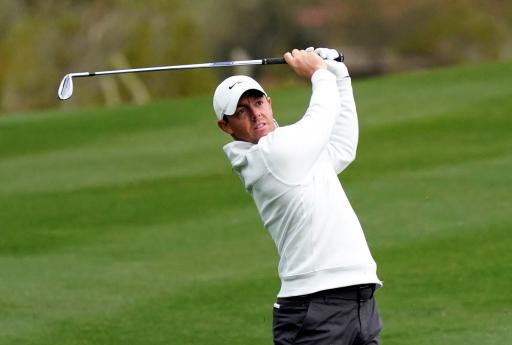 PGA Tour golf coach Peter Kostis believes Rory McIlroy's short irons are "too upright" and as a result are causing him to hit too many pull hooks with his golf shots in 2021.

Kostis, the former golf coach of Bernhard Langer and the current coach of in-form Paul Casey, took to Twitter last week to reveal his thoughts on why McIlroy currently ranks outside the top 100 when it comes to strokes-gained approach the green on the PGA Tour this season.

Everyone is analyzing Rorys' swing with the wedges & short irons for his poor numbers from 50-150 yds. They are missing the root cause of the swing issues. IMO his short irons are too upright by at least 2 deg. causing pull/hooks with a good swing and then he guards against that.

"Everyone is analyzing Rory's swing with the wedges & short irons for his poor numbers from 50-150 yds," tweeted Kostis.

"They are missing the root cause of the swing issues. IMO his short irons are too upright by at least 2 deg. causing pull/hooks with a good swing and then he guards against that."

Kostis added: "As the swing gets more 'around' and less 'upright', and Rory has done that in the last few years, then the clubs must be adjusted accordingly. If he has stayed with his old specs, I believe they don't fit his swing shape now. Just my opinion."

The story is a little different at the top end, however, with McIlroy ranking second in strokes-gained off the tee (1.196).

WE TOOK A LOOK INSIDE RORY MCILROY'S NEW BAG FOR 2021. WATCH THE VIDEO BELOW:

From what we have learned during our previous custom fit sessions down the years, if a golfer's lie angle is either too upright or flat, the golf ball will initially travel approximately four yards off the intended target line.

The European Tour recently posted a graphic of exactly how far McIlroy hits each of the clubs in his golf bag this season:

Could well be! And SO much spin generally with fast hands/club head. Hard to get pinpoint accuracy with it fizzing inconsistent distances IMO. I don’t know how accurate this is but distances between clubs is so variable. A LW that goes 90 would be a good start. pic.twitter.com/530RfJmN7G

McIlroy, the World No.6, held every chance to win the Abu Dhabi HSBC Championship at the end of January but could only salvage a solo third. He then went on to finish tied 16th at the Farmers Insurance Open before rallying late with a 64 to finish tied 13th in his last start at the Phoenix Open.