Patrick Cantlay is feeling good about his game as he produced another sensational round, this time at Pebble Beach. 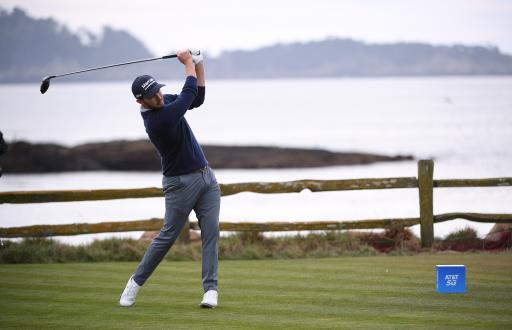 Patrick Cantlay fired a joint course record of 10-under par at Pebble Beach on Thursday to take a two-shot lead at the AT&T Pebble Beach Pro-Am.

The American got off to a hot start with three consecutive birdies, before his par at the 4th hole was followed up with four birdies in a row, 7-under par after just eight holes.

The World No.11 made the turn in 29 and added another birdie to his scorecard at the par-4 11th hole and had to wait until the 17th before adding a further gain and a final birdie at the last for a score of 62.

"I think we got Pebble in pretty much ideal conditions and I don't think it's going to be like that the rest of the week," said Cantlay, who went into this week's PGA Tour event as the favourite to win.

"The greens were good this morning and receptive, and so I hit a lot of good shots just right out of the gate and made everything. I didn't have very many long putts, but the mid-range putts that I did have I made all of them.

"My swing feels really good right now. The ball's starting on the line that I'm seeing, and then my distance control has been really good, which is key out here. I try to leave myself below the hole a lot and I was able to do that."

RELATED: Jordan Spieth HOLES OUT FOR EAGLE from 113 yards at Pebble Beach!

Cantlay, who has now played his last two rounds on the PGA Tour in 21-under par, feels good about the current state of his game and believes sticking to his routine will help him get the job done this week.

"My game's in a really good spot. I feel really comfortable. And I'm just going to stick to my routine. I'll be aggressive off the tee when I can and aggressive into the greens when the hole location allows it and conservative when I have to.

Akshay Bhatia, who hit every green in regulation, shares second place with Henrik Norlander just two shots behind Cantlay, whilst Jordan Spieth continued his recent form with a 7-under par opening round to head into Friday in a tie for fourth.