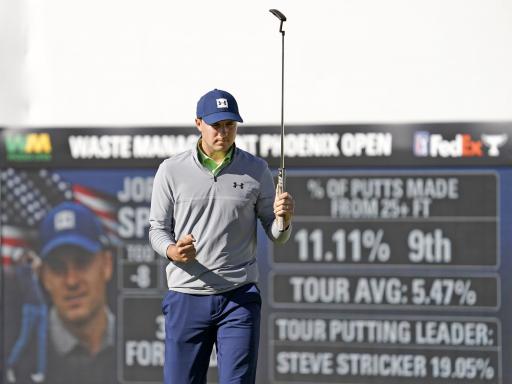 As Jordan Spieth was going birdie crazy on day three at the Phoenix Open, social media was erupting with excitement at the return to form of the three-time major champion and former World No.1.

Spieth, 27, may have won 11 times on the PGA Tour but his last victory dates back to the 2017 Open Championship at Royal Birkdale. In fact, he has been so out of form of late that the majority of his weekends have been spent on a practice range rather than a golf course.

The American arrived in Arizona off the back of five missed cuts in his last eight starts on the PGA Tour.

But after recent discussions about his swing with Tiger Woods' former long-time coach Butch Harmon, and a number of swing adjustments in the off-season to try to return to former glories, Spieth is finally seeing reward for his hard work at TPC Scottsdale this week.

Regardless of the result in the final round of the Phoenix Open on Sunday - incidentally falling on America's greatest day of sport with the Super Bowl LV - Spieth's stunning round of 10-under 61 (tying his low score in his PGA Tour career in the process) well and truly proves his game is back where it belongs.

It was the Spieth of old on Saturday with chip-ins, laser-like irons and birdie bombs with his famous finger point. We even had 5,000 golf fans back out on the course - no doubt something that helped fuel Spieth's flawless round of 10 birdies and eight pars.

Oh, and what's that you say... The Masters in two months time? Stop it you.

One golf fan was spotted leading the crowd on the 17th hole, but appeared to get a little carried with proceedings and was quickly chased by police officers.

We're not quite sure what was going on but it seemed like the man wanted to jump into the lake to get an even closer look at Spieth's birdie putt. Spieth saw the funny side of it as he clapped the man and smiled, before he stepped in to drain his 10th birdie of the round.

Spieth even celebrated holing his putt by pointing in the direction of the man, and the rest of his adoring fans.

Judging by the series of snaps, it looked like the man didn't get away from police officers. At least it looked like he enjoyed his moment of fame in Spieth's spotlight. We're not quite sure where his mask was though? That's probably for another article.

RELATED: SPIETH FIRES INCREDIBLE 61 TO JOIN SCHAUFFELE OUT IN FRONT AT THE PHOENIX OPEN

It's not just us here at GolfMagic getting excited about Spieth's resurgence. Social media is currently in a frenzy at the prospect of Spieth being in contention for his first win in three and half years, standing proud at 18-under par in a tie for the lead with Xander Schauffele heading into the final round of the Phoenix Open.

Here's a look at some of the best tweets:

“He hasn’t won an event since the 2017 Open and some said he was done but he’s Jordan Spieth. Jordan “fucking” Spieth. I never gave up on up him. I told everyone he’d figure it out off the tee and that he was still one of the best putters off all time” pic.twitter.com/eAFdZP3H2O

JORDAN SPIETH IS BACK pic.twitter.com/Uh0SkNVJFM

Jordan Spieth is back pic.twitter.com/6yFtsKjgrU

Update... still in love with Jordan Spieth. That’s all. https://t.co/4XAjgfHpDS

Will Spieth get the job done on Sunday, or will Schauffele or someone else spoil the party? Share your thoughts and comments over on our social media channels or YouTube channel.