Jordan Spieth fires an incredible 10-under 61 to join Xander Schauffele out in front at the Phoenix Open on the PGA Tour. 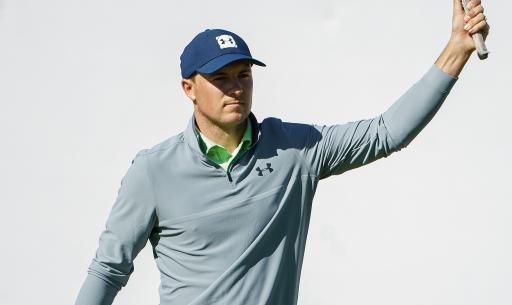 Jordan Spieth rekindled the magic of old in front of 5,000 fans on day three of the Phoenix Open by firing a stunning 10-under 61 to move into a tie for the 54-hole lead with Xander Schauffele.

Spieth's incredible 61 ties his career-low round on the PGA Tour and it moves him up to the top of the leaderboard on 18-under par alongside his compatriot Schauffele, who carded a 6-under 65 on what proved a low-scoring day at TPC Scottsdale.

RELATED: SOCIAL MEDIA ERUPTS AS SPIETH HITS THE FRONT AT THE PHOENIX OPEN

Jordan Spieth is fired up.

The former World No.1 will now have a golden chance to win his 12th PGA Tour title and his first since lifting the famous Claret Jug at the 2017 Open Championship at Royal Birkdale.

"I feel good," said Spieth. "It just felt like I was playing better golf and swinging the golf club well. It's getting there.

"To shoot 10-under you've got to do a lot right, but I also got a lot of good breaks. It's not to say I didn't get some good breaks, the hole caught a few balls, and I got some good ones in the desert, but that's what you need."

On playing golf in front of 5,000 fans, Spieth said: "The only downside of holing that long birdie putt on 16 was that the roar would have been even louder, but it was still pretty cool."

Schauffele, 27, will be going in search of his fifth PGA Tour title and first victory in two years since the 2019 Sentry Tournament of Champions.

The American may be winless for 24 months but he has proven one of the most consistent performers on the PGA Tour in recent months, as reflected by him moving up to a career-high World No.4.

Scottie Scheffler and Kyoung-Hoon Lee both birdied the final hole for rounds of 66 as they moved into a tie for third and three strokes back on 15-under par.

Louis Oosthuizen raced around in 63 shots to vault up to 14-under par alongside Justin Thomas, who posted an equally impressive 64.

Brooks Koepka (66) birdied five of the last six holes to move into tied seventh on 13-under par with James Hahn (66) and Steve Stricker (69).

PGA Tour
PGA Tour: How much did each player win at the AT&T Byron Nelson?
PGA Tour
Jordan Spieth: "My rehearsal is not exactly what I'm trying to do"
PGA Tour
K. H. Lee shoots lowest ever round on PGA Tour to win AT&T Byron Nelson
PGA Tour
Justin Thomas on Sunday at AT&T Byron Nelson: "14-under is EXTREMELY doable"
PGA Tour
Should TPC Craig Ranch be a PGA Tour venue? Golf fans have their say...