Jordan Spieth shot a 66 on day two at Colonial Country Club to move to 11-under-par in a round that was delayed by bad weather. 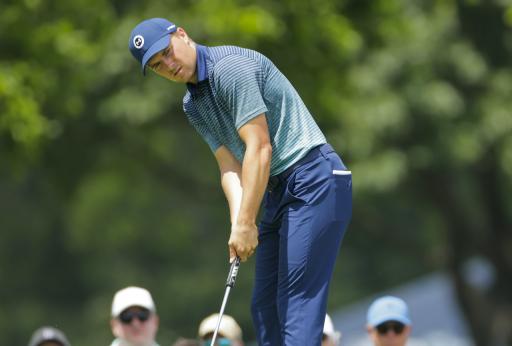 Jordan Spieth fired a second-round 66 at the Charles Schwab Challenge to maintain a one-shot lead ahead of Jason Kokrak.

Spieth, who shared the lead on Thursday with Sergio Garcia on 7-under-par, made three birdies on his front nine to move to 10-under-par, but his round was delayed by bad weather.

Play was suspended at 1.49 pm local time and resumed at 4.15 pm in Fort Worth, Texas. Spieth continued to thrill his home crowd on the back nine when golf resumed, holing a 20-foot putt on the 14th hole to move ahead of Kokrak on 11-under-par.

Giving the fans in Texas something to cheer about late @CSChallengeFW.@JordanSpieth birdies No. 14 and takes a 1-shot lead. pic.twitter.com/fC5dsdQszV

The World No. 28 parred his last three holes, including a great up-and-down on the 18th green, to complete his second round in 4-under-par and his first 36 holes without a bogey.

It is no surprise to see the three-time major champion at the top of the leaderboard at Colonial Country Club, as the 27-year-old won the event in 2016 and has come second on two other occasions.

Kokrak began the second round two shots behind the leaders, but another solid round of 65 has secured his place in the final group with Spieth on Saturday.

The 36-year-old, just the one-time winner on the PGA Tour at this season's CJ Cup, made six birdies and one bogey in his second round. Kokrak has also had top-10 finishes at the Arnold Palmer Invitational and Players Championship in 2021.

Garcia could only manage 1-under-par 69 on Friday to fall three behind the leader on 8-under-par, while last week's PGA Champion Phil Mickelson unfortunately missed the cut, which was set at 1-over-par.