Bryson DeChambeau was agitated by a fan during a practice round at last week's PGA Championship. 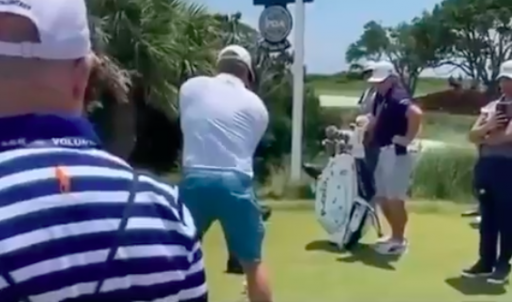 Bryson DeChambeau did not enjoy a comment made by a golf fan during a practice round at last week's PGA Championship at Kiawah Island.

DeChambeau and Brooks Koepka are currently going through a feud that has now become public, but it began while the pair were playing the Ocean Course last week.

During a practice round, DeChambeau hit another one of his booming drives and while the ball was in the air, a fan shouted 'Alright Brooksy.'

This video had earthed on social media and while DeChambeau and Koepka were exchanging comments on Twitter, Koepka used this video in one of his responses.

This spat on social media is not the first time that the pair have directly shared words and made their dislike for one another clear, but it is no secret that golf fans, players and the media have enjoyed the tension.

When the four-time major winner Koepka posted this video after DeChambeau said that he was "living rent-free" in his head, players and fans left their responses.

I think Brooks is mad because Bryson is bigger than him and is higher in every statistic on the PGA tour right now.

How about you guys meet on the 9th green at 9 tonight and we hash this beef out. I’ll moderate.

I agree social media is toxic but this is why I can't delete it. This is why I am on twitter dot com.