Spieth lands the third ace of his PGA Tour career at the par-3 2nd at Bay Hill on Saturday... 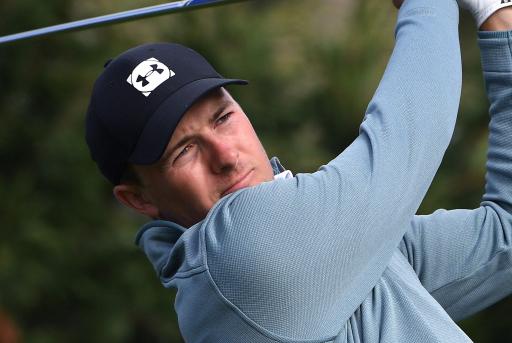 Jordan Spieth produced a moment of magic on day three at the Arnold Palmer Invitational with a stunning hole-in-one on the testing 222-yard par-3 2nd hole at Bay Hill.

Spieth would go on to card a solid round of 68 despite two late blemishes, and he finds himself two strokes off the 54-hole pace set by England's Lee Westwood, who posted an exceptional round of 65.

WATCH Spieth's hole-in-one on Saturday at Bay Hill below:

Spieth started the third round of the Arnold Palmer Invitational four strokes off the pace set by Corey Conners, but raced out the blocks with a birdie at the 1st hole from 19 feet, shortly before sending his tee shot into the cup for an ace at the tricky par-3 2nd hole.

The 27-year-old would, however, drive into the water at the par-4 3rd but would recover manfully when draining a 31-footer for par.

WATCH: BRYSON RIPS DRIVE 370 YARDS DOWN THE PAR-5 6TH - AND HE LOVES EVERY SECOND!

Spieth was once again out of position at the par-4 5th but relied on his putter to save a par from 20 feet.

He then did the unthinkable and holed out from the greenside bunker for birdie at the par-3 7th.

Keeping the electricity high. @JordanSpieth holes out from the bunker to take the solo lead @APinv.#QuickHits pic.twitter.com/ALDoYlUo9x

It would not end there either, as Spieth continued to run riot when burying a 36-footer for birdie at the 10th. WATCH THE PUTT BELOW:

Spieth would then follow that up with a two-putt birdie at the par-5 12th to move two strokes clear of the field at the time.

Things would unravel slightly in trickier conditions coming home with bogeys at 14 and 17, but Spieth would sign for a 68 to move to 9-under par and sit just two shots off the pace as he goes in search of his first PGA Tour win since the 2017 Open Championship.

Spieth has being enjoying something of a resurgence on the PGA Tour in recent weeks with a tie for fourth at the Phoenix Open and a tie for third at the AT&T Pebble Beach Pro-Am.

The three-time major champion then added a respectable tie for 15th at the Genesis Invitational to maintain his solid run of form.

Westwood moved into the outright lead on 11-under par with a stunning display of golf that included eight birdies and an eagle in a round of 7-under 65.

The Englishman takes a narrow one-shot lead into the final round over Bryson DeChambeau, who smashed a 370-yard bomb down the par-5 6th, and Canada's Corey Conners.

Westwood will bid to win his third PGA Tour title to go alongside his previous victories at the 1998 Freeport-McDermott Classic and 2010 St Jude Classic.

Should he land the victory on Sunday, he would become the oldest international winner on the PGA Tour in 40 years.

The 47-year-old has of course won 25 times on the European Tour during his career, which ranks him eighth in the all-time wins list.

Spieth joins compatriot Keegan Bradley on 9-under par in a tie for fourth, with Tommy Fleetwood back on 8-under par.

Rory McIlroy has it all to do from 7-under par.

NEXT PAGE: PATRICK REED ACCUSED OF "CHEATING AGAIN" BY A NUMBER OF GOLF FANS ON SOCIAL MEDIA