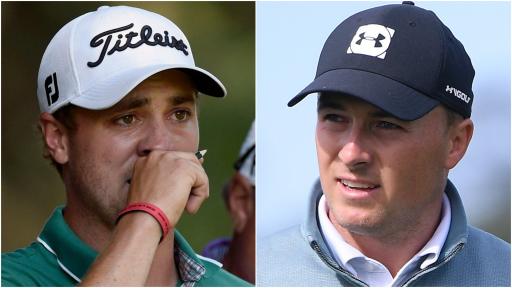 Jordan Spieth has revealed how his caddie Michael Greller FaceTimes Justin Thomas every single time they play the 15th hole at Riviera in honour of Spieth's singles victory over Thomas at the 2012 NCAA Championship.

Spieth defeated Thomas 3&2 some 10 years ago in the final singles match of the 2012 NCAA Championship between Spieth's Texas Longhorns and Thomas' Alabama Crimson Tide.

Texas ultimately won the match, as a result of Spieth's victory over Thomas.

The match between Spieth and Thomas was all-but rubber stamped when Spieth holed out from the 15th fairway.

Greller, the man who has regularly been on the bag of Spieth, still loves to make sure Thomas never forgets that moment.

"He asked when we were walking up 15 if he should FaceTime him now even though he was two groups behind us.

"Justin answered it for a few years and now he just either answers it flipping him off or he doesn't answer it at all."

Thomas has just about had enough of the prank now.

"I've stopped answering though because I know when it's here and he FaceTimes me, he's on 15," said Thomas.

"But now he FaceTimed Bones [Jim Mackay, his caddie] and then he got me that way. He's sneaky."

NEXT PAGE: DUSTIN JOHNSON HAS REVEALED A HUGE PGA TOUR STATEMENT ABOUT THE SAUDI GOLF LEAGUE