PGA Tour pros hit out at Phil Mickelson, according to a report in The Mail on Sunday. 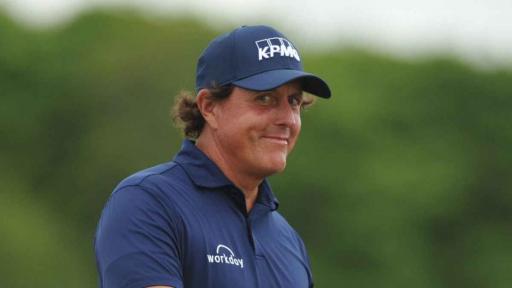 A number of PGA Tour players are expected to call for Phil Mickelson to be suspended from the PGA Tour at next week's players' meeting ahead of the Honda Classic at PGA National, according to Derek Lawrenson for The Mail on Sunday.

One PGA Tour pro has gone as far to label Mickelson "toxic" following his controversial comments about the PGA Tour in recent weeks, while another is adamant that Mickelson "has to be suspended."

RELATED: PHIL MICKELSON ISSUES AN APOLOGY OVER HIS RECENT COMMENTS AND ADMITS HE NEEDS TIME AWAY

Mickelson's peers on the PGA Tour have gone against him in recent days after the six-time major champion launched an extraordinary broadside against the PGA Tour speaking ahead of the Saudi International earlier this month.

OPINION: "IT'S TIME FOR THE PGA TOUR TO DITCH PHIL MICKELSON FOREVER"

Golf's oldest major champion then incredibly also admitted to actively working against the PGA Tour in favour of a new Saudi Golf League.

It is understood that Mickelson, who has reportedly been offered £70 million to join the new circuit, has joined three other current PGA Tour players and their lawyers to draw up the structure for the new golf super league.

That has not sat well with the majority of the golf world, especially those on the PGA Tour.

"I don't know what to say other than I hope to God I don't get drawn to play alongside him any time soon," one PGA Tour pro in the player advisory council told The Mail.

"What the hell's wrong with him? He has to be suspended after this, doesn't he?"

Another PGA Tour pro has told The Mail: "Whether you're interested in what the Saudis have to offer or siding with the status quo, who wants to be associated with Phil after this? He's totally toxic."

"He's done a lot of great things for this tour but if he and others are that passionate about the Saudis, go ahead to their Super Golf League," added Thomas. "Nobody's stopping them."

Bryson DeChambeau was reportedly offered $240 million to join a new super league but the big-hitting American has of Sunday evening declared his loyalty to the PGA Tour.

With the majority of stars now confirming their allegiance to the PGA Tour, which also includes Tiger Woods, it would seem the future of any golf super league backed by Saudi billions is in major doubt of ever being a success.