Jordan Spieth "surprised" Bryson DeChambeau is sticking with the PGA Tour, while Rory McIlroy admits the Saudi Golf League is now "dead in the water" 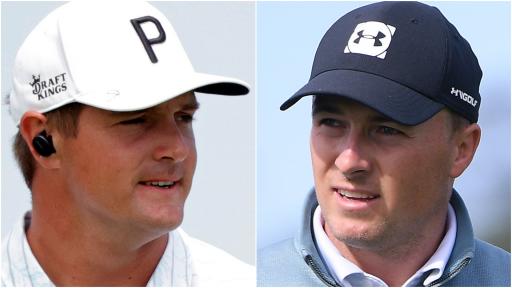 Jordan Spieth admits he is "surprised" Bryson DeChambeau has decided to remain on the PGA Tour amid speculation he was heading over to a proposed new Saudi Golf League with huge financial reward.

Spieth trudged off the 18th green at Riviera following a lacklustre round of 72 to finish tied 26th, and he was then pressed for his comments about DeChambeau and Dustin Johnson both committing their futures to the PGA Tour.

Johnson and DeChambeau took to their social media accounts on Sunday afternoon to confirm they would be remaining loyal to the PGA Tour, despite lots of talk they were going to become the poster boys for a new super league backed by Saudi billions.

"I'm surprised [by] Bryson with the rumours about his offer and we all know he was strongly considering it," said Spieth after his final round at Riviera.

When asked whether the Saudi Golf League has any possible future without the majority of the world's best golfers, Spieth, who has already committed himself to the PGA Tour, was left unconvinced.

"I don't know, considering how many of the top 10 to 50 players in the world have now committed publicly to the PGA Tour, including those guys [DeChambeau and Johnson], I don't know who they are getting to fill it out and make it worth it."

RELATED: BRYSON DECHAMBEAU TO REMAIN ON THE PGA TOUR

Rory McIlroy was also asked to comment on DeChambeau and Johnson's social posts, to which he replied: "Who's left to go? I mean there's no one. It's dead in the water in my opinion."

McIlroy, who finished tied 10th at Riviera, added: "I was really glad to see DJ and Bryson put out those statements this week.

NEXT PAGE: DUSTIN JOHNSON COMMITS HIS FUTURE TO THE PGA TOUR