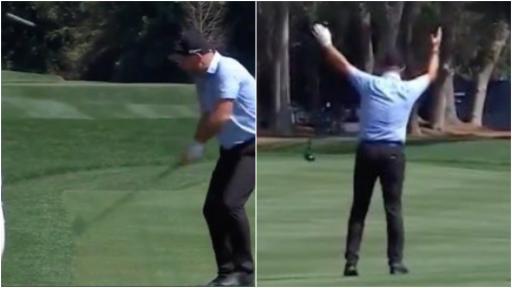 Jordan Spieth came very close to hitting Rory Sabbatini with his tee shot on the par-5 11th hole during round three at The Players Championship - and was then overheard seeing the funny side of the incident.

Spieth struck his tee shot right into the trees but it deflected back onto the fairway. Only what the American didn't realise was that Sabbatini was still standing on the fairway about to play his second shot, and Spieth's ball came within a whisker of striking the Slovakian.

While video footage of the incident has since been removed from social media, there are some images still surfacing as to exactly what happened.

Spieth: “Is that Sabbatini? Gawd. I couldn’t pick a worse person to hit into.” pic.twitter.com/yeuJ8zHGZL

Sabbatini went on to play a fairly average second shot down the par-5 11th hole, and as he walked down the fairway, he looked back to the tee box to give Spieth an almighty stare while throwing his hands up in the air.

Spieth was then overheard saying to his playing partner Collin Morikawa: "I couldn't pick a worse person to hit into."

In case you are unaware, and without going into too many details, let's just say Sabbatini isn't the most loved player on the PGA Tour.

Sabbatini would, however, go on to make a birdie at the hole, while Spieth would make a par.

After the round, Spieth told Golf Digest: "If I had to choose guys to hit into, he wouldn’t be one of them. I’m a little lucky, though, as we get along well. Collin said the same thing, too: ‘He likes me, too, so we should be fine.’

"I'll apologise when I see him, I hit a tree right by him, so it couldn’t have been a good feeling."