2018 FedEx Cup champion Justin Rose three-putted his final hole at the Wyndham Championship on Sunday to miss out on the 125-man playoffs field by one spot. 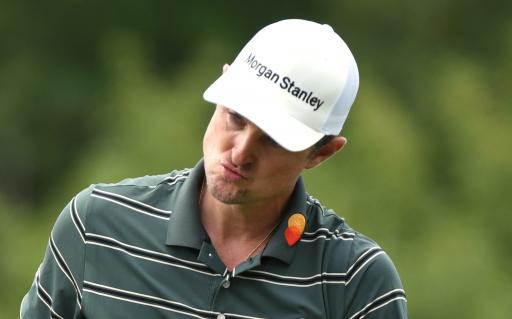 Justin Rose suffered a heartbreaking end to the Wyndham Championship, as he three-putted the 72nd hole to miss out on the FedEx Cup playoffs by one spot.

Entering the week at Sedgefield Country Club, Rose needed a good week to secure a place at the Northern Trust Open next week but a final-hole bogey and some magic from Chesson Hadley put an end to his 2021 PGA Tour campaign.

Rose began the final round in North Carolina five shots behind leader Russell Henley on 10-under-par and he started superbly with two birdies and a fantastic eagle at the par-5 5th hole to move into a share of the lead.

Despite a bogey at the 7th hole, he added two more birdies at the 10th and 13th holes to reach 15-under-par. The Englishman, unfortunately, bogeyed the 14th hole to fall back to 14-under-par, but his worst moment was to come.

A costly bogey at 18 for Justin Rose.

He's now currently projected out at No. 126 and Chesson Hadley has moved in at No. 125. https://t.co/LR9EDKVLPu pic.twitter.com/FDmeAjXisy

Being one shot short of the leading mark of 15-under-par, Rose three-putted the final green to fall back to 13-under-par in a tie for 10th place.

While the 2013 US Open champion was battling away, Hadley was storming through the field. Beginning his day on the 10th hole, the 34-year old set a personal best over nine holes, taking only 29 shots to play his first nine.

This included an incredible hole-in-one on the par-3 16th hole which contributed to a superb score of 62. Hadley needed to finish in 16th place or better, a place which he achieved.

This meant that Rose dropped down to 126th in the FedEx Cup standings and Hadley hopped into 125th place, making the field for the first leg of the playoffs at the Northern Trust Open next week.

The tournament ended in a gutwrenching away for Rose. He finished two shots behind Branden Grace, Adam Scott, Kevin Na, Si-Woo Kim, Kevin Kisner and Roger Sloan who began a mass playoff to decide the winner of the Wyndham Championship.