Justin Thomas agrees with Mickelson, but thinks PGA Tour has other BIG problems

The former world number one was speaking to the media ahead of the CJ Cup this week about Lefty's outburst. 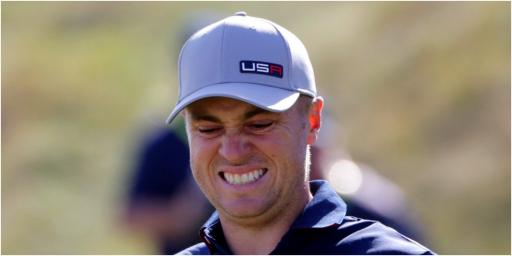 Justin Thomas has revealed he is not a fan of the new rule which will limit the length of drivers to 46 inches, but believes there are other issues to face.

Speaking to the press ahead of the CJ Cup, which has upped sticks from South Korea and headed to Las Vegas, Thomas was clear and concise in his thoughts.

"Yeah, I don't really agree with it," Thomas, who has won the CJ Cup twice, said of the USGA and R&A announcement.

But he added: "I don't know. I feel like there's a lot of other things, you know, like the arm-bar putter, that they should be approaching as opposed to he length of the driver.

"I think the fact that you see only a few people using a long driver speaks for itself, that it's not really that big of an advantage. It's a lot harder to hit it straight."

The PGA Tour has said it will adopt the new rule come January 2022 which means it will have big impact on players like Phil Mickelson and Bryson DeChambeau. DeChambeau has yet to respond to the news.

USE THIS TEE PEG DRILL TO PERFECT YOUR PUTTING

Go Crazy! Big point for the duo at the Presidents Cuppic.twitter.com/AWYLDWXPL5

Arm-lock putters are a controversial topic. Even Billy Horschel is against it and was quoted as saying: "It's just sort of locked in. Guys are doing it too good."

While only a handful of Tour players use or have experimented with a longer driver shaft. On the LPGA Tour, Brooke Henderson appears to be the only player in favour of adopting this method.

Thomas said the announcement will not grow the game, adding: "But they seem to have their mind around that for a while now, so it seems to be the issue because if there's an amateur golfer or players at home that want to hit it a little bit farther, so be it.

"Or if there's guys out here that want to have a chance to put it in play with a 47-, 48-inch driver, then power to them. I had that opportunity, I just chose not to. I don't necessarily agree with it, but it is what it is."

NEXT PAGE: WHY INJURED TIGER WOODS WILL PICK UP $8 MILLION FROM PGA TOUR