'Stupid is as stupid does': Phil Mickelson compares USGA to Forrest Gump

Golf's ruling bodies have taken a huge step in limiting driver lengths and Lefty is not happy. 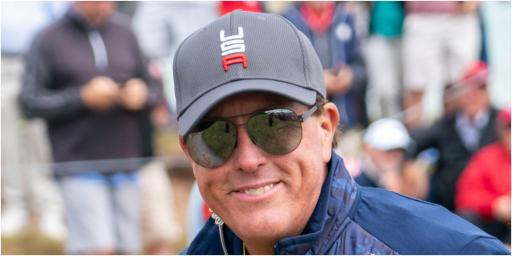 As soon as the news broke we were counting down the minutes until Phil Mickelson responded.

And it wasn't too long because the revelation golf's ruling bodies have taken the next big step in limiting driver length's has caused quite a stir.

In a joint announcement yesterday it was revealed that a new Model Local Rule will allow a professional tour or tournament organizing committees to implement a rule limiting non-putters to 46 inches.

The USGA and the R&A put out a joint press release.

The current maximum is 48. The announcement was hardly a surprise considering this has been rumbling on since 2016 and Mickelson spilled the beans about all this earlier this year, taking to social media to vent and using an hilarious ice cream analogy.

He described the proposed changes as pathetic as it will incentivize shorter swings which lead to injury and the fact that it would not allow for the length of the arc to create speed.

"Stupid is as stupid does." Mrs Gump," Mickelson tweeted. "Really though, are the amateurs trying their best to govern the professional game the stupid ones? Or the professionals for letting them?"

A number of players or have experimented putting longer drivers in to play to increase their distance. That includes none other than the Tour's biggest hitter Bryson DeChambeau who uses a 48-inch driver. Mickelson's driver length is 47.5-inches.

He has yet to respond publicly but no doubt he will have some opinions to air soon.

Justin Thomas, speaking ahead of the CJ Cup this week in Las Vegas, is also not a fan with the changes. "Yeah, I really don't agree with it," he told the media.

Mickelson is not playing this week in Las Vegas but he won last week on the PGA Tour Champions when he took down the Constellation Furyk & Friends.

It was his third victory in four starts since he began playing with the seniors.