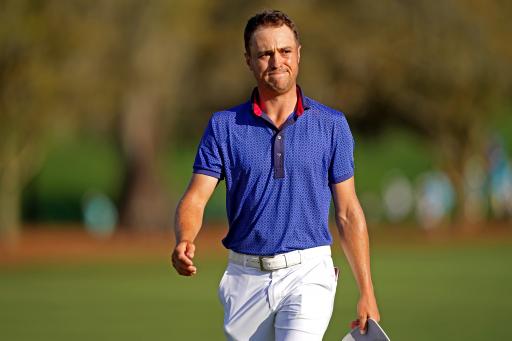 Justin Thomas is now EVENS to sign a new apparel deal with Greyson Clothiers after sporting the brand's Bat Web Polo shirt to victory at The Players Championship at TPC Sawgrass, according to TheseAreTheOdds.com.

Thomas, 27, had previously been sponsored by Ralph Lauren but that deal was terminated as a result of using a homophobic slur when missing a putt at the Tournament of Champions on the PGA Tour in January.

But Greyson is now leading the race for the services of the newly-promoted World No.2 after wearing the company's polo shirt to victory at the PGA Tour's flagship event of the season.

Congrats @JustinThomas34 those draws off the tee on 16 & 18 were something nice....as was your outfit #playerschamp

Former World No.1 Luke Donald, who is a Greyson ambassador, also tweeted his congratulations to Thomas, fuelling speculation further of a move to Greyson.

"Congrats Justin Thomas, those draws off the tee on 16 and 18 were something nice... as was your outfit," tweeted Donald.

The other interesting angle to this potential apparel deal for Thomas is that Greyson was founded by Charlie Schaefer, who was the previous SVP of design at Ralph Lauren. Schaefer also worked there when Thomas initially signed with Ralph Lauren, and it would appear their relationship is still strong given Thomas wore Greyson colours to victory on Sunday.

A spokesperson for TheseAreTheOdds said: "Justin Thomas is the hottest golfing property out there for every golf brand right now. Yes, he made a mistake earlier on in the year, but all of the big names in golf are going to be competing for his services after what we saw over the last four days.

"He's easily one of the best golfers in the world and any brand in the golf space would want to have him on their roster, but Greyson have the upper hand in the race to get JT on board."

Nike Golf is next up in the betting to sign Thomas at 5/1, while a return to Ralph Lauren is down at 20/1.

Here's a look at the leading contenders to sign Thomas to an apparel deal, with their respective odds:

Previous
Justin Thomas on Tiger Woods: "He likes to give me a lot of grief"
Next
TaylorMade Golf announces extensive new bag range for 2021