Keegan Bradley and Sam Burns traded blows on Saturday at the Copperhead Course to share the lead on 14-under-par. 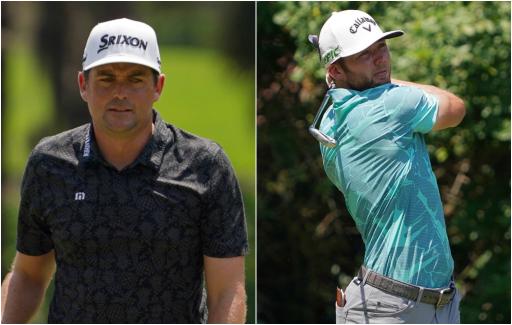 Keegan Bradley and Sam Burns remained locked together on 14-under-par to tie for the lead after the third round at the Valspar Championship.

Both players began the day on 12-under-par and Burns made a fantastic start to his third round with an eagle on the par-5 1st hole. The 24-year-old followed this up with birdies on the 3rd and 5th holes.

After Bradley bogeyed the 13th hole, Burns held a commanding three-shot lead on 16-under-par and it looked as though the man from Louisiana was taking big steps towards his first PGA Tour title.

Bouncing back in a big way. @Keegan_Bradley gets within 1 with an eagle. pic.twitter.com/xIUsrzzlax

Bradley birdied the first hole and also the 5th hole, but the highlight of his round came on the par-5 14th hole, when he chipped in for an eagle of his own to cut Burns' lead to just one shot.

Burns bogeyed the par-4 16th hole, which meant the pair locked horns on 15-under-par and co-led as they did after three rounds.

Both players parred the 17th hole and bogeyed the final hole to shoot scores of 2-under-par on Saturday and finish on 14-under-par for the tournament.

Max Homa began the day four shots behind the leaders and the World No. 41 remained in contention on Saturday with a superb 5-under-par round of 66.

Homa holed his 138-yard approach shot from the middle of the par-4 6th hole fairway for an amazing eagle. He made another five birdies and two bogeys to complete his round to sit one shot behind Bradley and Burns.

Ted Potter Jr began the third round 10 shots behind the leaders after shooting 2-over-par on Friday, but a superb 63 on Saturday brought the 37-year-old back into contention on 10-under-par.

Abraham Ancer, Cameron Tringale and Joaquin Niemann all finished on the same score as Potter Jr in a tie for fourth place after the third round.